Home Idaho News Exclusive Interview With Sen. Christy Zito: Grocery Tax Repeal and the Truth of What Happened in the Senate 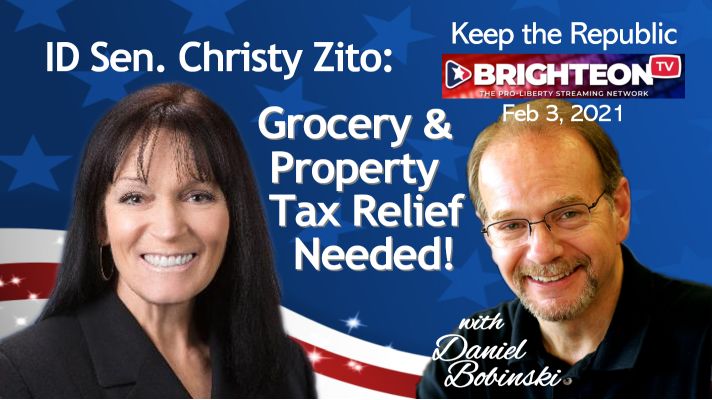 The Idaho Senate is nearly full of Republicans, but just because they have an “R” after their name, it doesn’t mean these people stand for what’s in the Idaho Republican Party Platform. This week the Senate leadership boldly attempted to smear Senator Christy Zito, a member of their own party, because she wanted to fulfill her oath of office and work for the people instead of playing the power game set up by the Establishment.

On Feb. 3, True Idaho News editor Daniel Bobinski had Senator Zito on his Keep the Republic show to talk about this issue.

The segment featuring Senator Zito can be seen in the first segment of the show:

According to Zito, grocery taxes and property taxes affect the poorest among us the most. “It’s even worse now with inflation,” Zito said.

On the show, Zito explained that when House or Senate leadership decides a bill should not be heard, the citizens of Idaho are not getting represented properly. At the very least, bills should get a print hearing so the citizens’ representatives serving on committees can debate whether a bill should move forward. To have only one person making those decisions is not representative government.

Zito also says that only a few people have ever contacted her about income tax relief, but an overwhelming number of people are regularly contacting her about grocery tax repeal and property tax reduction. However, just like last year, the 2022 session has seen a grocery tax repeal bill placed in a drawer without so much as getting a hearing in committee.

What really happened on the Senate floor

In an attempt to start a discussion in the Senate and with hopes that a grocery tax repeal could actually get passed, Senator Zito attempted to get grocery tax repeal attached as an amendment to the income tax reduction that passed the House last week.

Unfortunately, Senate leadership issued a statement and lied about Zito’s intentions, claiming she wanted to derail the income tax bill.  Such a statement, according to Bobinski, is a lie.

A day later, when Senator Zito had the Senate floor with special privilege attempted to provide her side of what happened and explain her intentions, Senator Kelly Anthon, the Majority Caucus Leader, moved that the day’s session be adjourned, and Zito’s voice was silenced.

It was later discovered that Zito appeared to be using her floor time inappropriately, but it was most notable that Anthon did not call for adjournment until after Zito started to read the letter issued by Senate Leadership the previous day. Stated another way, it would appear Anthon did not want Zito’s true intentions to be part of the legislative record.

People can hear Zito explain her intentions by watching / listening to the Senator’s exclusive appearance on Keep the Republic.

Those who want to know more about what has been happening in Idaho regarding repealing the grocery tax should read the article written by Daniel Bobinski on the subject on how Idaho’s Republican Senators are Lying.

If you like what you read at True Idaho News, consider supporting our work. Visit www.TrueIdahoNews.com/support and look at the various options!