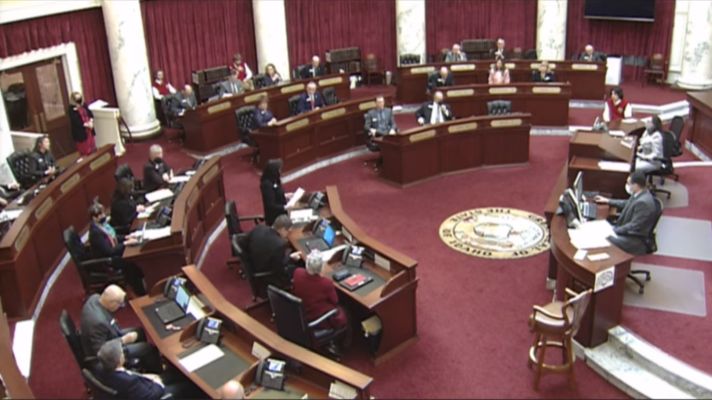 This week, Senator Christy Zito did her job to represent the will of Idahoans. However, instead of holding to their many promises to listen to the people, Idaho’s Republican Senator leadership chose to lie about one of their own who dared defy the will of the executive branch.

The Gem State is only one of five throughout the entire country that taxes all groceries, and with a nearly $2 billion surplus in Idaho’s budget – money that rightfully belongs to Idaho’s taxpayers – citizens are contacting their legislators by the thousands, asking that the state’s grocery tax be repealed.

Grocery tax relief has been desired by Idahoans for years, but “Republicans in Name Only” (RINOs) in Idaho keep playing games. First it was the conservative-turned-liberal C.L. “Butch” Otter, who illegally vetoed grocery tax relief several years ago.

By Idaho law, a governor has 10 days to sign or veto a bill. If the governor does nothing in 10 days, the bill automatically becomes law. In 2017, a grocery tax relief bill was sent to then-Governor Otter’s desk. On day 11, Otter vetoed it. The issue went to court, and amazingly, the Idaho Supreme Court simply slapped Otter’s hand and essentially said, “Don’t do it again.”

So much for Idaho’s Supreme Court accurately interpreting the state’s Constitution. If 10 means 11, then shouldn’t the Supreme Court say 70 MPH means 77 MPH? What gives them the right to redefine 10 days to mean 11 days?

Despite what many believe, the proverbial smoke-filled back rooms are pretty common in Idaho politics, and because of a Supreme Court that doesn’t know how to interpret the law, Idahoans have remained stuck paying a grocery tax.

When current office-holder Brad Little campaigned, he spoke openly about signing a Grocery tax repeal law, but being a true politician, he’s never seen a tax dollar he doesn’t like. And, since a lot of talk surrounds House Speaker Scott Bedke being Little’s watercarrier, Little has had no problem keeping grocery tax relief bills off his desk. Committee chairs sit at the pleasure of the Speaker, and all Bedke has to do is raise an eyebrow and behold, grocery tax bills get shoved into nooks and crannies by committee chairs. After all, if one wants to keep a committee chairmanship, one must keep the master happy. Bedke is known to remove chairs and vice chairs who do not do his bidding.

This past week, we saw that many Senate so-called Republicans also fell into line to protect Brad Little. Rather than listen to the will of the people, RINO Senators outright lied about Senator Christy Zito, who saw a workaround to stand up for Idaho citizens.

In a video statement, Zito said, “All I tried to do is what I have heard the citizens of this state have asked for, for the six years I have served in this body.”

Let’s be clear: misrepresenting someone’s motives is LYING. Therefore, the joint statement by Senate Leadership about Zito’s intentions is an outright lie, and Idahoans should stand up in unison and call them all LIARS.

It’s a sad state of affairs when people holding elected office who place an “R” after their name are supposed to uphold the Republican Party Platform, but miserably fail to represent the Republicans and non-Republicans they allegedly represent.

Worse yet, when Senator Zito had the floor on Wednesday during a point of personal privilege, she was shut down and not allowed to defend her position. The Senator who passive-aggressively bullied her into silence through parliamentary procedure? None other than the Senate Majority Caucus Chair, Senator Kelly Anthon. When that event occurred, it became apparent to this writer that Senate Leadership did not want Senator Zito’s statements recorded for all to hear, preferring instead that their published LIES remain the official narrative.

At this point, I believe so-called Republicans who are stopping grocery tax and property tax relief are ignoring the will of the people, and I also believe that misrepresenting Senator Zito’s stance makes them bald-face liars.

Prove me wrong, you so-called Republicans, especially those in the Senate. Represent the people who elected you and pass grocery tax relief and property tax relief. You are well-aware that a nearly $2 billion surplus exists in this state – money that rightfully belongs to Idaho’s citizens – and yet, instead of returning it to the people, you’re okay with Brad Little increasing the budget 17%? He says 8%, but in reality, you know it’s 17%, and yet you go along with it.

You call yourselves Republicans?

When will you act in accordance with the State Republican Party Platform? Pass grocery tax relief and property tax relief and do it soon. The bills are ready, all you need to do is pass them.

Oh – and Senate Leadership? You also need to apologize to Senator Zito. Don’t worry, I’m not holding my breath. But if you had an ounce of honor, you would do it – because it’s the right thing to do.

If you like what you read on True Idaho News, know that we don’t get money from Big Pharma – we rely on our readers to support us. Visit www.trueidahonews.com/support to learn about the various levels and bonuses available.