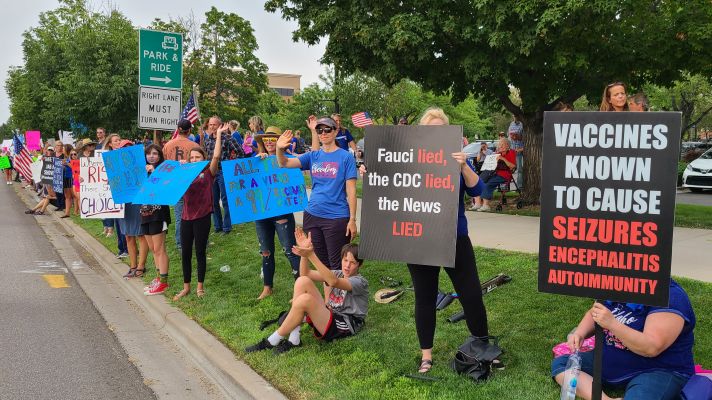 Approximately 1,500 Idahoans filled a half-mile of sidewalk Monday, July 19 in front of the St. Luke’s Hospital in Meridian (read the story here). The crowd consisted of moms, dads, friends, neighbors, and yes, nurses and doctors voicing their opposition to the vaccine mandates issued by the three largest healthcare providers in the state – St. Luke’s, St. Alphonsus, and Primary Health.

Following the success of Monday afternoon’s rally, a group of doctors and nurses called Take a Stand organized additional events throughout southern Idaho. Take a Stand has teamed up with America’s Frontline Doctors and Health Freedom Idaho to schedule five more protests.  Their announced schedule is as follows:

According to information released by Take a Stand, “Local law enforcement will be notified that we are having these events.”  Take a Stand asks that anyone attending be respectful to all law enforcement, to stay off all private property, and to not block streets or sidewalks.  Attendees are also encouraged to dress for hot weather and bring extra water.

The group emphasizes that they are not anti-vaxxers, but rather they are against forced vaccination, especially on an injection that has no longitudinal studies.

It can be safely assumed the very vocal and plentiful crowd on Monday afternoon got the attention of St. Luke’s. Their Director of Patient Services and Director of Security were among those from St. Luke’s management standing in the Hospital’s parking lot, observing what was going on along the street in front of their hospital. They would have had to have been deaf to not hear the horns honking on thousands of cars driving by as Idahoans signaled their support.

Drew Taylor, Director of Patient Services, and Abbey Abbondancolo, Director of Security, were both asked to give comment regarding the crowd in front of their hospital. Both refused.

Employees of St. Luke’s, St. Al’s, and Primary Health have been told they have until September 1 to get “vaccinated” or they will lose their jobs. Sources for True Idaho News report that similar mandates may be in the works for schools and the Dept. of Corrections, with one source saying, “People need to wake up and stop this. It’s not going to stop at hospitals. Forced vaccinations will become mandatory unless the people rise up and say, ‘No!’”