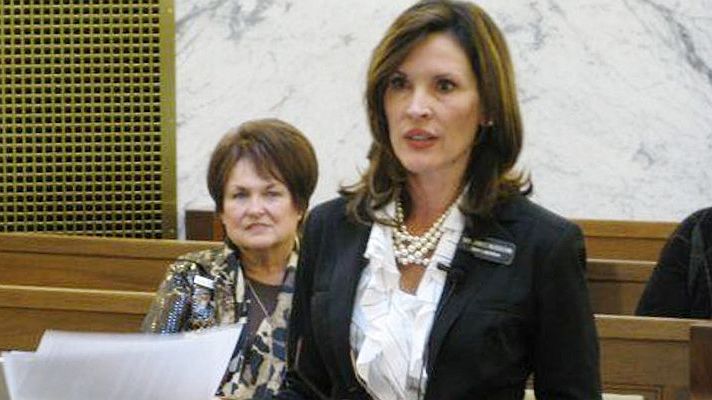 Lieutenant Governor Janice McGeachin is under heavy fire from clueless local media and backstabbing members of her own political party. She has announced plans to form a task force to investigate the extent to which critical race theory and other fascist/Marxist ideology has been injected into public school curricula in Idaho. Her announcement happened to coincide with Idaho’s legislature voting down Governor Brad Little’s proposed education budget, which required a return to the drawing board over similar concerns, so her move definitely drew attention.

What, exactly, is so horrific about the Lieutenant Governor organizing a task force?

KTVB personality Brian Holmes compares the task force to a mob hunting down a wolf no one has seen other than the little boy who cried, “Wolf!” He says the Lt. Governor refuses to answer his questions about where and what evidence she has of “insidious indoctrination” – his term. He omits the reality her task force will have the answers he demands only after it has performed its task. Think before you speak, Brian.

Retired Republican legislator Stephen Hartgen presents no relevant evidence before going on a rant against McGeachin that makes Brian Holmes look civilized. In his view, the Lt. Governor is “coddling up to rightist militia toy soldiers.” She and her conservative friends are all “malcontents” and “the arch rightists ‘Get Little’ crowd.” While they are at it, these conservatives are all “Rasputin overlords,” and “ankle biting Pomeranians,” who “whine, complain, and Bible thump.” They are also the notorious anti-vaxxers who, “if they had their way” would return Idaho to the “medical dark ages,” releasing “smallpox and polio” on the innocent.

Hartgen’s tirade is the very essence of indoctrination over exploration of the facts.

For Hartgen it is a contest between “reasonable common-sense Republicans” and “charlatans” and “fanatics.” His enemies promote “extreme legislative action just as the real…emergency fades.” By this he means the legislation that would end the Governor’s declared state of emergency – the one that was supposed to last for fifteen days and has now persisted for more than a year – and limit his powers to declare businesses and churches non-essential in a future emergency.

Hartgen might as well want to consider the emergency began to fade – as the charlatans and fanatics said it would – at about the same time the respectable Fauci and his colleagues predicted a new surge this past winter. Before Hartgen boasts of how many Idahoans have been vaccinated, he might want to consider what that has to do with closing schools by executive fiat when science has demonstrated in study after study that under forced online instruction, learning suffers and child suicides rise. He might also consider that schools have been demonstrably safer places than homes in terms of spreading disease. Follow the science? Mr. Hartgen and his cronies should try it.

In the meantime, let’s talk about the relationship between indoctrination and actual education. A relationship exists, and it is not pretty.

Educators have for centuries sparred with one another over whether the purpose of education is to teach people how to think or what to think. If one looks at the fruit, there is no contest. Totalitarian governments routinely insist on indoctrinating children to support their regime – teaching what to think. Religious cults do likewise. Ancient Sparta adopted this approach.

Alternatively, Sparta’s rival – Athens – believed that more thinking would be done and more knowledge would be gained if children were taught how to think.

Reality is self-evident to even a cursory student of history. How much of western civilization is indebted to Athens for achievements in mathematics, science, and philosophy, not to mention the arts and the art of government?

How much do we owe Sparta? The tyrannous regimes, cults, and civilizations who teach what they imagine as truth to be rammed down people’s throats – for their own good of course – always fail. Their ultimate end is to sink into the sands of time.

Cultures that encourage thinking outside the boxes – by teaching techniques for thinking instead of implanting thoughts – leave lasting imprints. They tend to live longer, have more vigorous corporate lives, and – well – they go to the moon, invent things like the internet, and eliminate things like smallpox.

Research unambiguously shows that children have difficulty learning at all when they are made to feel inadequate and destined to fail, whether that be by circumstance or design. How then – one might ask – does it help Idaho to indoctrinate children from toddlers to teens in the sick worldview that being one color is evil and being all other colors is permanent victimization?

Clearly, Idaho’s Lt. Governor seeks no fight. An intellectually honest person knows she is looking for healthy curricula to encourage and propaganda (if found) to defund. She is no doubt seeking truth and is prepared to act on whatever she finds – whether it be good, bad, or ugly. This educator – I hold an MA in Curriculum Development and special certification in Developmental Reading and Thinking – prays God’s blessing on her quest.

James A. Wilson is the author of Living as Ambassadors of Relationships, The Holy Spirit and the End Times, Kingdom in Pursuit, and his first novel, Generation – available at Barnes and Noble, Amazon, or at praynorthstate@gmail.com