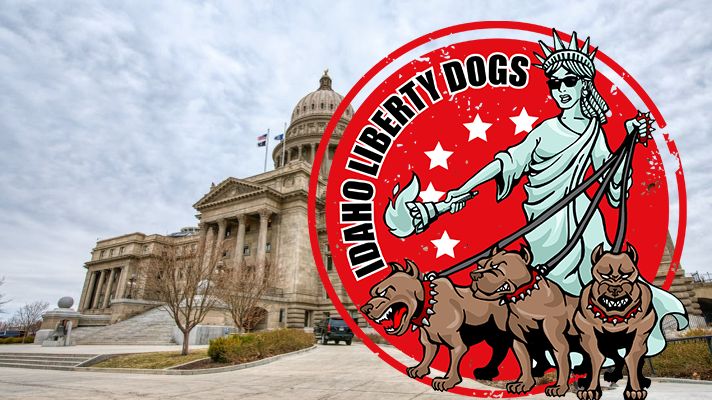 Editor’s Note: A far-left radical rabbi in the Treasure Valley has been more than a little vocal about people and organizations standing up for Constitutional causes in Idaho. Dan Fink, a rabbi at Ahavath Beth Israel in Boise, regularly makes unfounded and debunked statements about conservative groups. The group that most recently found itself on the radical rabbi’s hit list is the Idaho Liberty Dogs. For example, Boston Globe staff writer Hanna Krueger highlighted Fink’s vitriol against the Liberty Dogs. Interestingly, The Boston Globe did not bother reaching out to the Idaho Liberty Dogs for their side of the story. Before publishing this piece, True Idaho News reached out to Rabbi Fink, but he has not yet responded to our request for comment. In the interest of fairness, True Idaho News is publishing the response written by the Idaho Liberty Dogs, and does so with their expressed permission.

Rabbi Fink’s Got THIS Right at least: “If people continue to refrain from standing up, then soon enough it’s going to be too late.”

In what appears to be another desperate bid to discredit and silence his political opponents by spawning the slanderous myth that Idaho Conservatives are racist political oppressors, Rabbi Fink once again took aim at the Idaho Liberty Dogs (“ILD”) when he was recently interviewed by a reporter from the Boston Globe doing a puff piece about Fink (see article). ILD sees the resulting article’s blatant disregard for the truth as a stunning example of one of the most powerful tactics used by the Left to sway public opinion today when its reasoned arguments prove (as usual) to be insufficient to the task-namely, political gas lighting.

In the referenced article, Fink labels ILD members as “white extremists,” and the article goes on to suggest Conservative groups like ILD, the Proud Boys, and the Patriot Front are modern “extremist” groups that are guided by white supremacist ideologies that are similar to those that governed the long-defunct Aryan Nations. Speaking for itself, ILD denounces the baseless accusation, noting that

(1) ILD was founded (and continues to be led) by a proud first generation Cuban American whose family came to America to escape the evils of Cuban Communism and to live out the American Dream,

(2) ILD is made up of persons from all races and religions, and

(3) ILD’s guiding principle is that a system governed by the rule of law and economically and socially conservative principles (especially those embodied in the U.S. Constitution) is the system that is best suited to protecting and promoting the individual rights and well-being of all Americans-regardless of their color or religion.

Presumably because it makes for good theater, the article also promotes the false myth that Fink has somehow been threatened by ILD, quoting Fink’s overly dramatic claim that his Synagogue was on “high alert” in September 2022 because ILD had supposedly posted his name on its Facebook page with “a couple of bomb icons next to it,” and that the FBI had caused the post to be taken down.

The article also suggests the purported threat was made because Fink had criticized a candidate purportedly endorsed by ILD, and that ILD seeks to “ban books with homosexual content.” The truth is much more mundane: ILD and Fink have long been political opponents on several issues, including among others that:

(1) ILD wants to prevent children from having access to certain books through the public libraries (namely, books that contain inappropriate sexual content) that ILD believes are being used to groom minors for sexual abuse,

(2) ILD opposes Fink’s apparent position that mothers should have the unrestricted right to terminate a pregnancy at any point up until the moment of birth of the baby, and

(3) ILD opposes Fink’s apparent position that the freedom of speech should be somewhat conditioned upon the viewpoint expressed by the speaker.

In or around the first part of September 2022, as part of taking a candidate for political office to task for refusing to “disavow” ILD which had shown some unsolicited support for his candidacy (by re-posting one of the candidate’s posts), Fink asserted in a public blog that he considers ILD to be “in the same category as the KKK and every other white Christian nationalist group. . . [, and that he] believe[s] such hate-based groups are simply beyond the pale and need to be excluded from all reasonable discourse.”

Frustrated with those types of false and unsupported allegations, and outraged at Fink’s blatant support for the proposition that certain political viewpoints should be suppressed, ILD responded by posting on the ILD Facebook page a very strongly worded condemnation of some of Fink’s beliefs. ILD later amended that post to include a new line of text stating that ILD had discovered Fink was a former chairman on the board of Idaho Planned Parenthood. This added text was bookended with little bomb emojis to note the explosive nature of the added text.

ILD later voluntarily removed the post in its entirety (including the added text with accompanying emojis) after ILD reconsidered its desire to use such strong language in a public post. Contrary to Fink’s suggestion, ILD does not engage in hate speech and is not a hate-based group, ILD is not a “white
Christian nationalist group,” ILD never threatened Fink, and the FBI had nothing to do with ILD’s decision to remove its strongly worded post about Fink. Fink’s repeated claims on these topics do not make them true.

The defamatory article referenced herein appears to have been published in the Boston Globe without ever being fact checked, and it was certainly published without having anyone reach out to ILD for its side of the story, or even for comment. Nonetheless, this type of propaganda has become commonplace in our society today.

The real story here is that the referenced article provides us with a fresh opportunity to demonstrate to the public one aspect of what has gone so seriously wrong with our society today: The fact that rather than engaging in fair debates about the merits of its goals and methods (which it cannot win), today’s Left tends to resort to the politics of personal destruction that have become so emblematic of our times to destroy its enemies, without regard to the truth, and rather than having to go to the effort of persuading people about the merits of its positions.

That is what is happening when you see the Left shaming, ridiculing, marginalizing, and vilifying Conservatives today, rather than engaging in a well-reasoned debate about the various issues on which we disagree.

To the Left, the ends justify the means-and the ends they pursue are the destruction of individualism (in favor of the collectivism that drives Marxism, Communism and Socialism) so the Left can keep sufficient control over the population to retain their death grip on power.

So, we write today to remind you all to continue to stand up against this new methodology of left – and continue to find ways to shed light on the truth about what is happening in our society. Rabbi Fink and others will likely continue telling their lies, and gas lighting the masses, but we cannot let them silence us or shut us down. We must continue to stand up and be heard – PEACEFULLY – or our representative republic will be lost to the annals of history.

The Boston Globe’s article by Hanna Krueger referenced in this column can be found on the Boston Globe website and also on the organization’s Facebook page.

This response was first published by Idaho Liberty Dogs and is reprinted here with their permission.