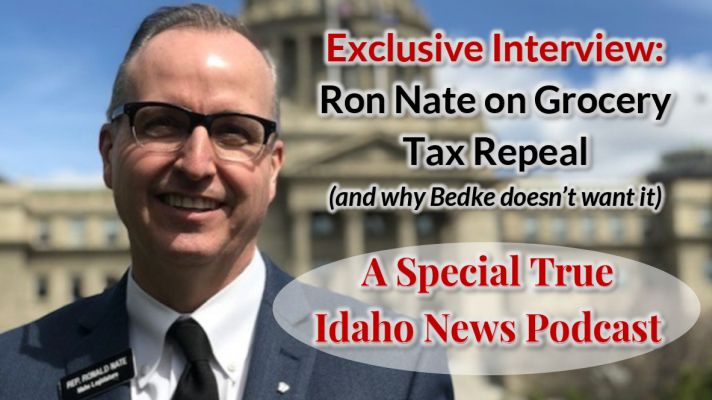 Some legislators say they will vote for grocery tax repeal, but don’t. Embedded in this podcast is an audio recording of Sage Dixon saying he “absolutely” will vote for grocery tax repeal. Much to the disappointment of his constituents, three days later Dixon voted against it. It is obvious Dixon is not exactly a legislator that keeps his promises, nor looks out for the people he represents.

Rep. Dixon chairs two different committees, and when the opportunity to vote on the grocery tax repeal came up on a procedural vote, Rep Nate says House leadership was reminding all chairs and co-chairs that this was a procedural vote, meaning they needed to vote with leadership. It would appear Dixon likes his chairmanship better than he likes keeping promises.

Later in the podcast, Rep. Nate reported that he’d heard House Speaker Bedke said leadership can’t allow conservatives to have a victory on grocery tax repeal because they will use that victory to unseat incumbents in the primaries. Again, these are not the words of a legislator who represents the people — it sounds like a man who doesn’t mind letting Idahoans suffer just so he can keep his friends – and himself – in power.

Rep. Nate also pointed out that the governor’s budget increase spreads millions of dollars to various agencies, and it’s a great way for the governor to win loyalty of government employees.

Currently, those that want grocery tax repeal are in a standoff with Rep. Steven Harris, chair of the House Revenue and Tax Committee, who says he will not hear a grocery tax bill.  Nate says this is not how the House should work. He believes even bills with which he disagrees should be given a hearing so debate can happen and a vote can occur.

He also says he would not vote for anyone who does not support a grocery tax repeal. Nate emphasizes that elections matter, and right now the Idaho legislature resembles a swamp. Change is needed.

How much you pay in grocery tax

After the Nate interview, podcast host Daniel Bobinski reviewed the size of the surplus (nearly $2 billion), and noted the state has approximately 1.9 million residents. Approximately 58% are taxpayers, so that means approximately 1.1 million Idahoans are taxpayers. Doing the math, this means if you’re a taxpayer, the Idaho government is sitting on approximately $1,720 of your money. People should note that this is extra money that they’ve collected – it’s not needed to operate the state.

According to the Bureau of Labor Statistics, the average family of four spends $11,712 in groceries each year. That means the average Idahoan is paying approximately $700 annually in grocery taxes.

Said another way, if a home has two taxpayers, the state has approximately $3,440 extra of their money. From his own words, Scott Bedke and the rest of House leadership don’t think you should be able to keep $700 of that, because he’s afraid conservatives will gain seats in the House.

Keep in mind, with inflation, that $700 number is only going up.

It is definitely a time for Constitutional conservatives to get out and knock on doors to help replace RINO incumbents – regardless of what Scott Bedke wants.

ALSO: Never miss a thing! Sign up for a FREE subscription to True Idaho News to get a weekly email with links to all that week’s stories – and every podcast. Visit www.TrueIdahoNews.com

Finally, we are supported by our readers & listeners. If you find value in the work we do at True Idaho News, please consider supporting out work. Visit http://www.TrueIdahoNews.com/support. NOTE: The first five Triple Diamond Sponsors get mentions on the podcast.