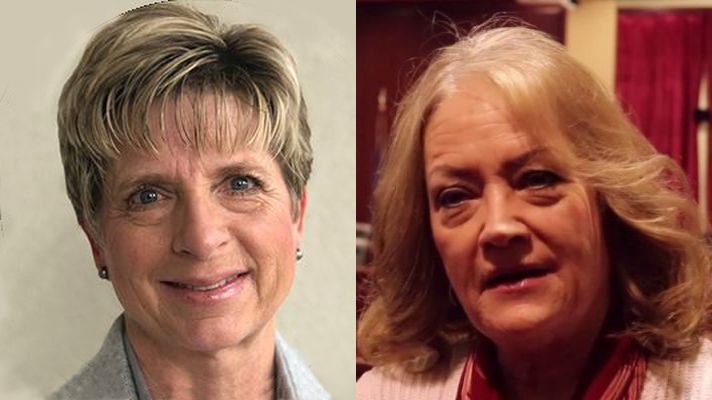 The collusion was observed by a visitor to the Canyon County Central Committee meeting on Tuesday, August 17. The room was crowded, and because not enough seats were available, some people had to stand along the wall.  A visitor standing behind Wasden observed she was texting with Patti Syme. Because the visitor was not pleased with what was being discussed in the texts, the visitor decided to snap photos of the text exchange.

As can be seen clearly in the photos, Patti Syme, wife of State Representative Scott Syme (R-Dist. 11) is the person texting the person who is holding the phone. The person with the phone is Tracey Wasden, wife of Idaho’s Attorney General, Lawrence Wasden.  The transcription reads as follows:

True Idaho News spoke with multiple committee members from Canyon County about the text conversation, and none wanted to be named for this story out of fear of retaliation by Syme and Wasden. One precinct committeeman said, “Patti is always talking about the need for unity – that we’re supposed to be a big tent. But here she is saying she wants to get rid of 20 of us? We stand for individual liberties and the Constitution – is that not part for of the state party platform? It’s abhorrent for these two do what they’re doing. They both need to resign.”

The person went on to say, ““It’s general knowledge that Tracey Wasden doesn’t believe in the party platform. She claims she and Lawrence [her husband, the state’s Attorney General] believe only the Constitution, but if anyone has followed the opinions coming from his office over his reign of terror, is almost laughable. They believe in their moral superiority to make decisions for you because of their position in the party. This is true class warfare. They do not care about Life, Liberty and pursuit of happiness for everyone. They care about IACI and doing what the Marble Cake Federalists want done to regionalize our government and collapse our republic.”

Coincidently, another member, who has known Syme a long time, also used the word “laughable.” The person said, “For her to say she’s not vindictive is totally laughable. She spread lies to get into her position as chair and she’s vindictive as hell toward anyone who gets in her way. Her and Tracy call on Chaney and Lawrence to write what amount to legal briefs to support whatever those two want to do, and then those get read at the meetings – by Lawrence Wasden himself, even though he’s only an alternate. Nobody wants to challenge the Attorney General, so these two get to run roughshod over the whole committee.”

The name Chaney refers to Greg Chaney, whose wife Sarah works closely with Syme and Wasden on the Committee. Chaney is a lawyer in Caldwell and also one of the state representatives who introduced legislation to suppress freedom of speech among Idahoans. Chaney’s proposed legislation was defeated.

When asked to explain the “lies” comment, the Committee member said, “It’s common knowledge that Syme visited people’s homes” and fabricated actions and motives of Machelle Hamilton. Hamilton is currently Vice Chair of the state Republican party and is the former Chair of the Canyon County Republican Central Committee.

Another Canyon County Committee member told True Idaho News, “Tracey Wasden has not made eye contact with me for 18 months – unless she wants me to vote her way on something, then it’s all sunshine and roses. It’s obscene how offensive they’ve become.”

Yet another member of the Canyon County Central Committee stated they were looking into taking legal action against Syme and Wasden. “We heard Patti Syme offered people dinners if they voted for her to be Chair, and now this. The problem is that Tracey’s husband is the state Attorney General, and Patti’s is a state representative, so even if we find violations of the law, the good ol’ boy system in this state will see to it that they don’t get punished.”

If that were to happen, it could fit the legal definition of corruption. USLegal.com defines the term thusly: “Corruption in the legal context refers to a wrongful design to acquire or cause some pecuniary or other advantage. Corruption may encompass a variety of wrongful acts, such as, among others, bribes, kickbacks, jury tampering, and abuse of public office.“

The person continued, saying, “Either they want to unite to fix America together because they want to keep its Constitutional layers or they are part of the group that wishes to collapse and replace our form of government. Maybe the Republican Party needs to simplify its platform so all members can know which side these people are on.”