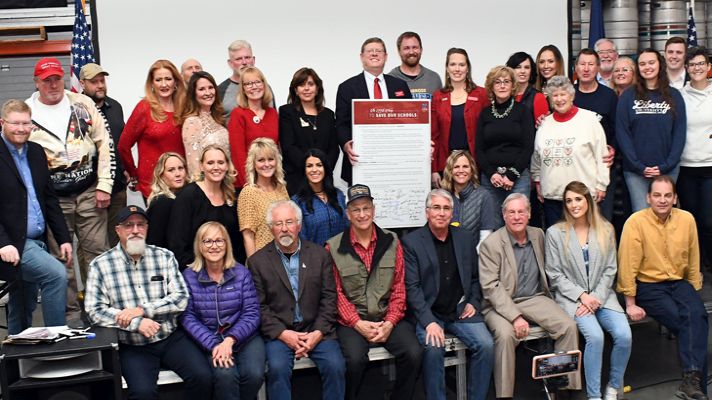 On Tuesday evening, Nov. 30, dozens of Idaho candidates, elected representatives, and citizens, led by Lt. Governor Janice McGeachin, gathered in Boise to sign “The 1776 Pledge to Save Our Schools.” Two Pledges, a Candidate’s Pledge and a Citizen’s Pledge, emerged as a result of the 1776 Commission, which was established by President Trump in 2020 to support patriotic education in America. Each Pledge underscores the need to restore Pro-American education in our nation’s schools.

Speaking to the crowd, McGeachin said, “Our Constitution was drafted to protect basic, God-given, natural rights. That is the purpose of Government.” She went on to say that “The primary duty of schools is to teach the basic skills to function in society, such as reading, writing, and mathematics.”

Parents in Idaho and across the nation have been pushing back against the ideas and practices that have emerged from Critical Race Theory (CRT), such as “equity” and the teaching that says anyone who is classified “white” is automatically racist.

McGeachin said that our schools should “teach our children how to think, not what to think.” And, with regard to our universities, McGeachin said “[W]e need to be able to have cordial and free discussion and debate.”

Pushing Back Against CRT

For example, a problem with the word “equity” is it sounds much like “equality,” but it’s not the same thing. Think of a foot race. Equality means everyone lines up to start together; equity means everyone must finish together.

As observed in Communist countries, the practice of equity in society de-incentivizes human initiative, and it lies in direct contrast to values and practices that led Amercia to become the most prosperous nation on earth.

The 1776 Action website states, “For years, patriotic Americans have watched in distress as entire generations of young people have been taught a false and one-sided narrative of American history.”

“Now, the slander of our history and heroes in the classroom is being paired with toxic, anti-American theories that pit our children against one another on the basis of race and gender.”

The website also states that President Trump recognized the “long-term danger of teaching young Americans to reject their own country and values,” and so he created the 1776 Commission by executive order to restore honest, patriotic education.

Sadly, the 1776 Commission was abolished by the current White House occupant, Joseph Biden, only hours after he took office.

Two pledges emerged from the work of the 1776 Commission; a candidate’s pledge and a citizen’s pledge.

THEREFORE, I PLEDGE to the voters of (enter District/location name) that I will take concrete steps to do the following in our K-12 public schools:

The Citizen’s Pledge starts the same as the Candidate’s Pledge, but has a shorter section after the “Therefore” –

THEREFORE, I PLEDGE to help replace elected officials, school board members, education commissioners, principals, deans, and university presidents who promote a false, divisive, and radical view of America and our fellow citizens with new leaders who respect our history, our values, our rights, and the God-given dignity of every person.

After McGeachin and other officeholders, candidates, and citizens publicly signed the pledge, a video featuring Donald Trump was played. Trump thanked the people for being dedicated to solid American principles and recognized Idaho for being a great state with great people. McGeachin told the crowd that all the signed pledges would be forwarded to Trump.