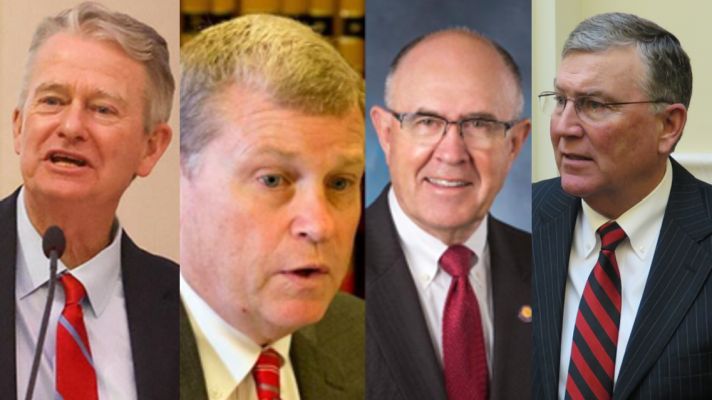 Establishment Republicans in Idaho are afraid right now. The reason? True constitutional conservative voters in Idaho see the state’s current Republican leadership creating larger, more oppressive government, and they are no longer sitting down nor backing away from the fight. And, because more voters are seeing through the smoke screen blown their way by the likes of Governor Brad Little, Atty. Gen. Lawrence Wasden, House Speaker Scott Bedke, and Senate pro tem Chuck Winder, Idaho’s voters could be making huge changes in Idaho’s executive and legislative branches come May 17 – primary day.

The struggle for bringing sanity and truth back to Idaho won’t be easy. Throughout the state, deceptive groups are putting on the Republican label but do not agree with the Idaho Republican Party Platform. Not only do they dismiss Republicans who subscribe to the platform, they have created multiple news sites, action groups, and political action committees that smear constitutional conservative Republicans as “extremists.“ Using deceptive techniques that have become all the rage (similar to “ANTIFA” claiming to be Anti-Fascist when their philosophy actually embraces Fascism), Idahoans must now sift through genuine-sounding names like:

Again, these groups  are not conservative, even though they claim to be. Voters must know that the people speaking for these organizations are either intentionally pushing for statist, top-down authoritarian government, or they’ve been unwittingly duped into doing so.

As we get closer to the May 17 primary, the blatant falsehoods (what you and I call “lies”) put out by these groups are becoming louder and also more persistent.

For example, the ”Defend and Protect Idaho” group is nothing but a “smear Janice McGeachin” group. Retired Deputy Police Chief Ron Winegar should be 100% ashamed of himself for implying that Janice McGeachin has anything to do with the actions or even fostering the mentality of what he described in his video. His words genuinely could be defined as slander, and frankly, I hope McGeachin presses charges against him.  In another commercial, former Ada County Sheriff Dennis Rainey makes nothing but empty accusations about McGeachin – and everything he implies would easily be struck down as false in a court of law. You’d think a former sheriff would know better.

Then there’s the Conservative Accountability Project. They make short videos spouting outright lies, smearing conservative legislators by implying they are voting to give themselves raises and voting to keep the legislature in permanent session. Nothing could be further from the truth, but that doesn’t stop this so-called “conservative” organization from purposefully taking the meaning of bills out of context. Then this group implies that true conservatives are the only ones who voted for these bills, when actually, veto-proof majorities of the entire House of Representatives voted to pass them.

Anyone who’s followed any of the legislation this group talks about knows that their deception goes so far it’s actually silly. Imagine a legislator feeding a beet to a puppy. Beets are perfectly fine for dogs, but if the Conservative Accountability Project made a video about it, they’d tell us that the legislator beat the puppy.  Yes, their ads are that deceptive.

Consider also the lies put out by former Supreme Court Justice Jim Jones and his Take Back Idaho group. They say they are trying to “take Idaho back” from “extremists,” but a little digging and we find that what they really want is for “Republicans in Name Only” – a.k.a. Imposter or Establishment Republicans – to continue instituting statist policies. Looking at their group’s real goals, it’s more accurate to say the Take Back Idaho crowd wants to take Idaho back to a time when legislators weren’t held accountable for bringing us policies that can only be called “statist.”

Bottom line, yes, we have statists operating in Idaho, and because they’re more than a little scared they’re smearing REAL conservatives as extremists. The Red population in this state has realized that our Blue management team has deceptively put R’s after their names, and they know that to save Idaho, those statists need to go.

Here’s the truth: Constitutional Republicans are GREAT for Idaho, because no matter what Little, Wasden, Bedke, and Winder say, it’s the true Conservative Republicans who will keep Joe Biden, Anthony Fauci, and the rest of the world’s statists from ruining this great state.

Little, Wasden, Bedke, and Winder can scoff and talk down to us all they want. It is they who are the deceivers and it’s time to send them into retirement.