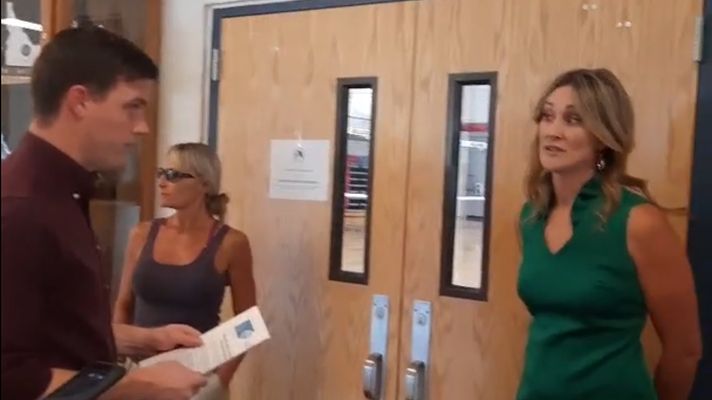 Governor Brad Little made a special trip to Nampa High School on Thursday so he could announce $30 million from state coffers will be allocated for Covid-19 testing in Idaho schools. Little made his announcement from the school gymnasium, but only educators and credentialed press were allowed in. Even Rep. Ben Adams, who represents the people of District 13 in Nampa, was refused entrance.

Video of the interchange between Adams and Marissa Morrison Hyer, the Governor’s press secretary was captured by multiple citizens.

In the video below, Hyer can be heard saying, “You’re more than welcome to watch it on your phone, but we’re not allowing anybody other than media in here – and school officials who are helping organize the event.”

Adams then asked if he could meet with the Governor afterward, and Hyer said she’d have to check the Governor’s calendar.

To reiterate, school officials were allowed to be in the gymnasium with the governor; the person elected to represent the people of that district was not.

True Idaho News reached out to Rep. Adams for comment about the incident. “This happened in my district,” Adams stated. “There should never be a point where a representative of the public does not have access to a public building in his own district to hear what the governor has to say. This is something the governor should NEVER do again – in any district.”

Adams was also concerned about the Governor acting contrary to the will of the legislature, which, according to the state constitution, has responsibility to oversee the state’s budget. “During the last session, the legislature voted down a bill that would have allocated $40 million for K-12 testing,” Adams said. “The legislature is still in session. We didn’t want to spend money on the testing, yet he unilaterally decided to allocate $30 million to K-12 Covid testing.”

The Centers for Disease and Control (CDC) estimates that, nationwide, 480 children under the age of 18 died from the flu during the 2018 – 2019 flu season, which is more than the total number of children under 18 who died from Covid since the Covid outbreak began.

Adams suggested the state develop a new approach to dealing with the health of Idaho’s citizens. “We need a different metric on Covid, not just counting who tests positive. A lot of people are going to get Covid, but we have a high rate of survival, even with the variants. Viruses become more transmittable over time, but less potent. We don’t need to focus on case numbers, we need to care about death rates. Those are the statistics that matter.”

Adams’ statement is supported by information published in 2017 by the National Academy of Sciences, which found that toxicity of viruses decreases after the initial stages of an outbreak.

The Issue of Covid ‘Cases’ and Covid in Children

Dr. Ryan Cole, a Mayo Clinic trained, board-certified pathologist and CEO of Cole Diagnostics in Garden City, has previously underscored the low risk of children dying from Covid. During a presentation at the Idaho State Capitol on March 18, Cole said, “Now that we can do a retrospective analysis, we know that children and young people remain at a low risk for Covid mortality.” He also said, “The same amount – or more – die from the flu every year.”

After describing how children’s immune systems are more robust than those of adults, Cole also went on to say that, “[I]t is not very likely that Covid will spread child-to-child, and it’s far less likely that it will spread from child-to-teacher. It would generally be the other way around.”

Cole also addressed the unusual focus the medical industry has placed on “cases” of Covid. “What is a ‘case’ of Covid?” Cole asked. “Just because we can detect Covid, is it a ‘case?’ In this room, 90 – 95% of you have mononucleosis – Epstein Barr virus. Ninety five percent of you have CMV virus, and probably 95% of you have shingles. Also strep throat and yeast infections. In a laboratory, through a very sensitive test, I could detect that. But if you don’t have symptoms, how many of you have shingles right now? Probably very few.”

Rep. Adams expressed deep concern about the direction of Idaho’s government the past 18 months, saying, “This virus will be here indefinitely. Unless we want the government’s response to always be here, too, we need to stop this. The government is walking hand-in-hand with corporations at this point, which is, essentially, fascism. The federal courts and the courts systems are not going to save us. We are not living in an America that we used to know.”