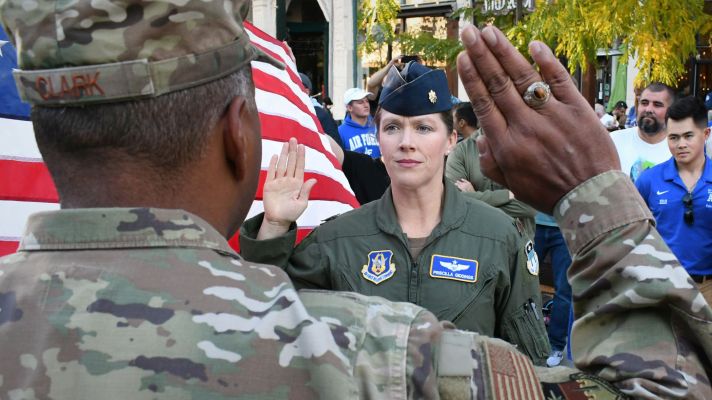 State Representative Priscilla Giddings (R-Dist.7), a White Bird resident and veteran of Operation Enduring Freedom in Afghanistan, has been promoted to Lieutenant Colonel in the United States Air Force Reserves.

Currently, Lt. Colonel Giddings is attached to the U.S. Air Force Academy, serving as the 368th Outreach Squadron Lead, overseeing 58 officers in seven states who conduct assessments on applicants to the Air Force Academy and ROTC.

Giddings graduated from the Academy in 2005, and earned Top Gun status upon completion of A-10 training as a fighter pilot. She was elected to Idaho’s House of Representatives in 2016. Giddings is also author of the book, Curiously Strong: A Female Fighter Pilot’s Story of Developing Strength, which details the values she learned in her upbringing and her experiences in the Air Force.

Lieutenant General Richard M. Clark, Superintendent of the U.S. Air Force Academy, conducted the swearing in ceremony. Giddings officially became a Lt. Colonel on Oct. 14. In a statement to True Idaho News, Giddings said “It was a memorable day as I held up my right hand and stood at attention in front of the flag to be sworn into the new rank of Lt. Colonel. After I reaffirmed my oath to support and defend the Constitution of the United States, my daughters were able to pin on my new rank. I hope that is just one of many experiences that will kindle a patriotic spirit within them.”

Giddings’ promotion comes despite an attempt to smear her name through a coordinated campaign of submitting formal complaints to the Air Force Inspector General’s office. The letter-writing campaign was organized by the Leftist group, the 97% Project, which is headed by attorney Mike Satz. In 2007, Satz created the Critical Legal Studies course for the University of Idaho’s College of Law and taught the course there for seven years.

In the last legislative session, Giddings took a lead role in defeating a bill for a federal grant that would have brought the practices resulting from Critical Race Theory into early childhood education in Idaho. It appears the letter writing campaign was an attempt at retaliation after Giddings’ success in killing the legislation. In promoting Giddings to Lt. Colonel, it appears the Air Force found no cause for acting against Giddings. Of the 39 officers affiliated with the Academy eligible for promotion, only 14 were a promoted, and Giddings was ranked # 2 among them.

Giddings is married with two children. In 2018, she received the Outstanding Woman Veteran’s Award. She is lifetime member of the Veterans of Foreign Wars, the American Legion, AmVets, and the National Rifle Association. Giddings is also a candidate to be Lt. Governor of Idaho.