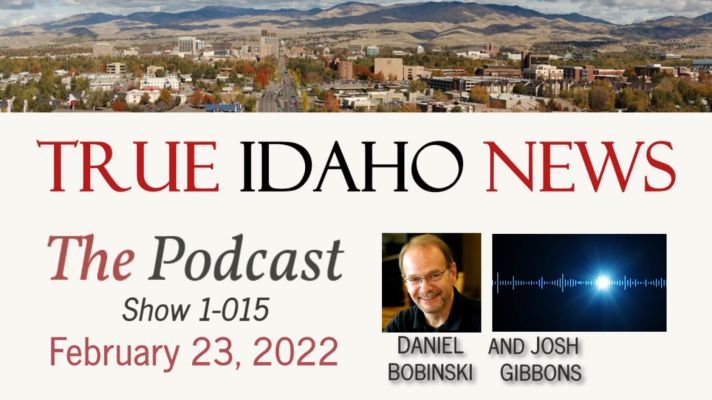 Delays this week for the podcast and other True Idaho News articles are due to editor Daniel Bobinski getting a “C” infection. Suffice it to say Ivermectin & Hydroxychloroquine are like magic, but Daniel still has a frog in his throat during this recording! If you want the free PDF containing early treatment protocols and links to interviews with doctors who have experience treating the “C” infection – it’s free for the asking. Just request it via email at TrueIdahoNews@protonmail.com.

Or listen to it here:

First up – Daniel & co-host Josh Gibbons reviewed one of the latest video ads put out by the so-called “Conservative Accountability Project.” It should be noted that despite their name, this group is NOT conservative. Also, the ad contains multiple falsehoods and misrepresentations – so much so they should be called LIES.  Their video can be viewed here: https://www.youtube.com/watch?v=mdC2PefDHdc

Within hours, a video using the same footage was released on the Facebook page, “Stop Idaho RINOs,” in which the soundtrack was changed to resemble a late-night TV ad from the 1990s for sexy phone calls. The new ad calls out Reps Scott Bedke, Greg Chaney, and Sage Dixon as hypocrites and their being tone deaf to the cries of Idahoans. View that ad here: https://www.facebook.com/watch/?v=1116528732481848

Other news:  The Idaho State School Board has finally announced it is withdrawing from the National School Board Association. Surmised by the hosts:  It’s an election year and the withdrawal is to make Brad Little look more conservative than he is (4 of the five people on the state board are appointed by Little). It’s predicted that if Little wins the primary, the state board will rejoin the NSBA.

Canada and the Convoy: Canada’s government is abusing its citizens, and the actions taken by the government do not portend well for liberty.

Regarding the U.S. trucker’s convoy, UncoverDC reporter Wendi Strauch Mahoney is embedded in the convoy and will reporting live on Daniel’s Keep the Republic TV show on Thurs, March 3. The show airs live at 2pm mountain time can be seen on Brighteon’s Roku channel or on www.Brighteon.TV.

House Bill 631 is a mask bill that prohibits any political entity in Idaho from mandating masks. Josh played a tape of Republican imposter Rep. Scott Syme, who is woefully uninformed about mask efficacy. Studies showing that masks have no statistical impact on viral transfer can be viewed here: https://www.rcreader.com/commentary/masks-dont-work-covid-a-review-of-science-relevant-to-covide-19-social-policy

Josh also shared information on the differences between political donations to Priscilla Giddings and Scott Bedke in the Lt. Governor’s race. Spoiler alert:  Giddings’ donations are from everyday Idahoans; most of Bedke’s donations are from lobby groups, special interest groups and other politicians and their spouses.

Daniel shared the content of HCR 029, a resolution for “Adverse Childhood Experiences.” The resolution expands statist practices in Idaho. State employees will be empowered to institute interventions if they suspect childhood trauma has occurred. Impostors and Democrats voted for this bill.

Finally – a new website designed and produced in part by True Idaho News is www.IdahoSession.com, makes it EASY to find bills and resolutions. Visit and share it!

True Idaho News is supported by our readers! Please visit our support page.