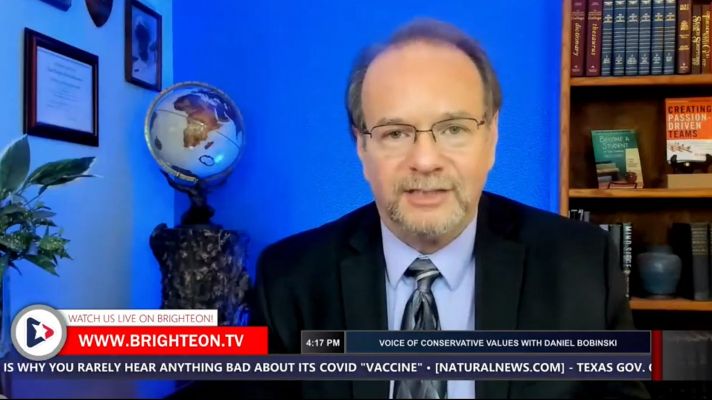 On this week’s Voice of Conservative Values TV show (video also embedded below), host Daniel Bobinski took a shot at government agencies and media platforms that are “gaslighting” America. As one example, Bobinski called upon the Idaho Department of Health and Welfare to remove false and misleading information from their Facebook page.

Throughout his monologue, Bobinski was passionate about the need to call out falsehoods that are presented as truth. “The real misinformation is coming from places like media and the CDC,” Bobinski said. Bobinski emphasized that it is long past time for people to stand up and speak truth, even in the face of government agencies and platforms that have larger megaphones.

Bobinski also explored the immense negative societal impact of mandatory jabs. Loss of hospital workers, loss of first responders, and loss of truckers who deliver products to stores is likely to create a “perfect storm” that sets the stage for Joe Biden to usher in draconian, freedom-crushing policies.

After Bobinski’s monologue, investigative journalist Wendi Strauch Mahoney from UncoverDC came on as a guest to discuss how parents are standing up and making a difference in the Loudon County, Virginia school board situation.

During the second half of the show, Bobinski’s guest was Rev. Bill Cook, founder of America’s Black Robe Regiment. The two discussed how the Johnson Amendment is toothless because it is not constitutional. Prior to the Johnson Amendment, pastors spoke freely from the pulpits of America about politicians and political issues. But Lyndon Johnson, who was publicly “dissed” by pastors in the 1950’s, attached an amendment to an IRS bill that said churches would lose their 501(c)(3) exemption if they preached politics from the pulpit.

Cook pointed out that pastors in the 1700’s were instrumental in preaching the need for liberty, and as such, they were catalysts for planting the seeds of liberty among the colonists. Cook then emphasized that today’s pastors need to ignore the toothless Johnson Amendment and get back to speaking boldly from their pulpits about the issues facing America. He said without pastors assuming their role of leadership in this area, it is unlikely America will turn around.

Watch the Oct 21 broadcast of Voice of Conservative Values here: