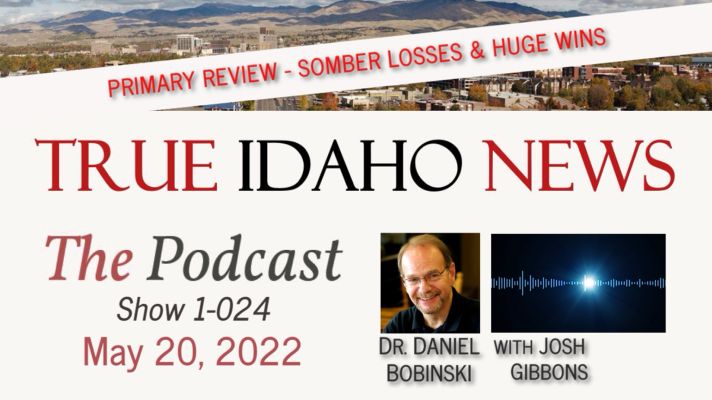 On this episode of the True Idaho News Podcast, Daniel Bobinski and co-host Josh Gibbons debrief the Idaho Primary.

Many in Idaho are down about the losses on the statewide offices – Four of the five major statewide seats went into the hands of the establishment, but on the upside, the Attorney General’s seat went to Raul Labrador, and we hope that Labrador will not view himself as the Governor’s personal attorney (as did Lawrence Wasden).

Listen to the podcast now!

Or – listen to the show right here:

Also covered:  The overwhelming amount of LYING that was dished out about true conservatives was rampant. Scott Syme spent $200,000 smearing Judy Boyle (Dist. 9) and one of the most liberal House reps (Syme) tried to paint himself a conservative and claimed endorsements he didn’t have. In a word, Syme was extremely dishonest. So was Scott Bedke (Lt. Gov race) and Brad Little (Governor’s race), Chuck Winder (Dist. 20) and the three slimebuckets who lied about Rep’s Ron Nate, Kerrey Hanks, and Chad Christensen.

As Gibbons said, the liars were desperate. They knew they couldn’t win on their stances, so they had to lie.

Bobinski announced that he’s in talks with several conservative legislators to explore better ways to educate voters on where to get true conservative voter info.

The big wins were in the Senate, with at least a dozen strong conservatives getting elected and many of the big-government left-friendly stalwarts losing their seats. It’s very likely that Chuck Winder will not be the Senate President Pro Tempore in the upcoming session. Bobinski and Gibbons review some of the important seat changes.

Bobinski closed the podcast by talking about the Christian consensus that permeated the early States, and how the country’s founders knew that our form of government would not do well unless the people were thirsting after the righteous of God found in Scripture.

ALSO: Never miss a thing from True Idaho News! Sign up for a FREE subscription and get a weekly email with links to that week’s stories and podcasts.

NOTE: Triple Diamond Sponsors get mentions on the podcast!!