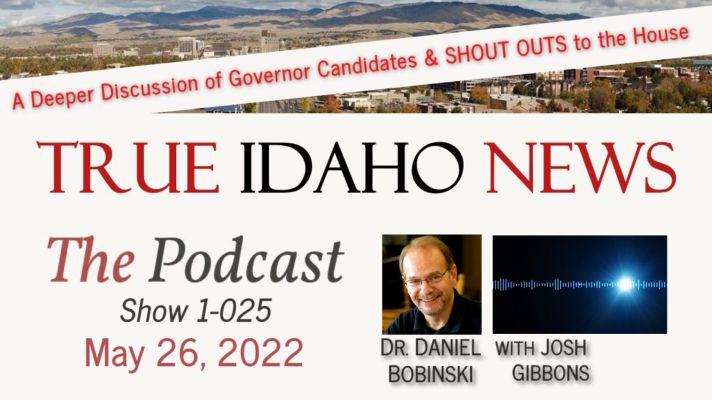 Up until a few days before the Idaho primary, True Idaho News editor Daniel Bobinski had no intention writing anything that resembled an endorsement. But, as he stated in his a previous podcast, with all the lies that were flying around, Bobinski decided he had to say something. In this podcast, Bobinski elaborates with great transparency on the article he wrote, “An In-Depth Analysis of Governor Candidates.” Specific people discussed include Brad Little, Ed Humphreys, and even Lynn Bradescu.

The podcast can be heard on the following platforms:

The podcast can also be heard here:

Both Bobinski and co-host Josh Gibbons kept fairly mum during the campaign, but in this podcast (post-primary), they both stated that they believed candidate Ed Humphreys had a difficult time because he no discernable track record — and didn’t seem eager to establish one. In fact, what little track record Humphreys did establish was dismantling several conservative powerbases. Gibbons provides some key insights on this.

Statewide, conservatives lost in the executive branch races (save for the Attorney General’s office), mostly due to LIES. However, solid conservative victories did happen in the legislature.

In Canyon County, Tina Lambert was identified by Gibbons as solid conservative and “the real deal.”  Also, Jacyn Gallagher’s win in District 9 over incumbent House Rep Ryan Kirby was a great victory. She didn’t move to Idaho with the intention of running for office, but saw that nobody else was stepping up to challenge the Far-Left Republican Kirby.

Also discussed: District 9 Rep. Judy Boyle, who fought off nasty set of lies from Scott Syme, and Rachel Hazlip, who as a 24-year-old newcomer, got 44% of the vote against Rep. Mike Moyle, who is the House Majority Leader and may be the next Speaker of the House. Hazlip proved herself to be wiser than her years and definitely has a future in Idaho politics.

Bobinski and Gibbons also discussed concerns about the Republican winner in District 14-A, Ted Hill, who is rumored to believe that it was “his turn” to serve in the legislature. Concerns included his ability to listen to his constituents, and also his position on homeschooling freedoms. Both agreed that Hill’s voting should be observed closely to see if he really aligns with conservative values.

Another hats off go to Jackie Davidson in District 16, who beat Richard Shurtleff for the GOP side of the ticket in the House.

Like what you find on True Idaho News? Consider supporting our work! Visit TrueIdahoNews.com/Support