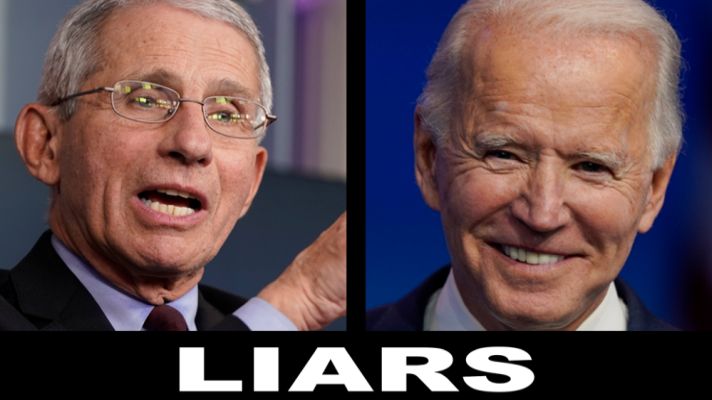 The world is being flooded with lies from the left. No doubt you’ve heard a lot of them. And it’s possible you’ve even believed some of them. Here are a few:

Dozens more such lies could be listed, but suffice it to say that Leftists and their cohorts in the propaganda media (sorry for the redundancy) are pushing these lies in an attempt to guilt Conservatives into silence. Their misinformation needs to be called out for what it is, and truth needs to be shouted from the mountaintops.

Tragically, Leftist lies are also getting people killed.  Here are a few examples:

It borders on hilarious to hear the propaganda media claim that mRNA “vaccines” are safe and effective. In my state of Idaho, Governor Brad Little is among the chief perpetrators of this lie (even with the “R” after his name), but his Dept. of Health and Welfare – as well as every major media outlet in the state – has openly touted this same lie for nearly two years. And pretty much every governor in the land has been touting this same blatant lie.

The Vaccine is NOT safe and it is NOT effective

Let’s be clear: Saying the “vaccine” is safe and effective is a blatant lie. Here’s some information on these so-called “vaccines.”

For the record, the mRNA injection is gene therapy, despite the “fact-checkers” labelling that truth as false. Even the President of Bayer’s Pharmaceuticals said so.

Second, the mRNA “vaccines” are not effective. Consider the following:

As reported in the Washington Examiner in December of 2021, “When the vaccines were first made available in early 2021, the public was led to believe that inoculation would prevent infection and transmission. President Joe Biden argued last summer that ‘you’re not going to get COVID if you have these vaccinations.’ Dr. Anthony Fauci similarly declared on a Zoom call with TikTokers that if they got vaccinated, they wouldn’t have to worry about catching COVID-19. MSNBC’s Rachel Maddow claimed in March that COVID-19 ‘cannot use a vaccinated person as a host to get more people’ and that the ‘virus does not infect them.’”

Except none of that was true.

After the mad rush for everyone to get vaccinated, the facts were glaringly obvious that the “vaccine” was a bust.  So much so that even a month later, the CDC director was forced to announce that the “vaccines” did not prevent spread of Covid-19.

So no, the jabs are not effective.

Third, mRNA injections pushed on us to combat Covid-19 are not safe. In fact, they cause severe injury, up to and including death. Consider the following:

According to a September 20 article from the RAIR Foundation, Dr. Chris Alan Shoemaker, a licensed Ontario physician with 45 years of experience, says that “the vaccine is a more toxic version than the virus. More toxic, more damaging and more lethal, especially in the long term as it damages your t-cells.”  Shoemaker explained, “Your t-cells are an important part of your immune system to fight viruses and cancer. [The vaccine] will kill you quickly or slowly.”

Dr. Robert Malone reported on the CDC’s own research, showing that in the testing phases for the “vaccine,” 1 in 800 people suffered severe adverse reactions.

In a TownHall article, Wayne Allen Root says, “All over America, and all over the world, cardiac arrest, heart inflammation and heart attack deaths are exploding. Young athletes are dropping right on the field; star soccer players in Europe are dropping dead in the middle of games; referees, coaches and even fans in the stands are having cardiac emergencies. It’s something no one has ever seen before. It’s an epidemic.”

Root says, “What do all these victims have in common? They’ve all been vaccinated.”

It is true. People are dropping dead in record numbers because they were jabbed with a rushed-to-market “vaccine.” A group on Facebook called Died Suddenly News lists hundreds of thousands of stories describing injuries and deaths that occurred after people received mRNA injections. Reading through the stories is quite saddening, especially when considering none of those injuries needed to occur.

Without a doubt, saying the “vaccine” is safe and effective is a lie.  The facts are in: the vaccine is killing people, and it’s doing so at a rate much higher than those who died “with” Covid.

In a recent primetime speech where Biden looked and acted more like Vladimir Lenin than he did George Washington, America was told that people who are MAGA Republicans are domestic terrorists and are dangerous to the future of the country. If hate speech had a face, Joe Biden wore it that night. Despite claiming to be the President of all the people, Biden smeared half of the voting populace and declared them to be terrorists.

Again, this lie is being perpetrated in the media and throughout the Left – including the Department of Justice – and people are dying as a result.

On September 20, a 41-year-old North Dakota Democrat struck and killed an 18-year-old Republican with his car for the stated reason that he thought the 18-year-old was a Republican extremist who was “out to get him.”

Thanks, Joe. Thanks, FBI. Thanks propaganda media. This young man’s blood is on your hands. Your fearmongering LIES cost a young man his life because some half-witted Democrat believed the bull crap you spew as you try to stay in power. Nobody with a brain wants the policies you’re selling and you know it, so instead of “may the best argument win,” you lie about people who disagree with you – and they’re getting killed as a result.

The deadly quest for money and power

Whether it’s for the monetary profits and kickbacks revolving around the Medical Industrial Complex or for the attempts to maintain power because most people know their positions are worthless, the Lies of the Left are killing people.

What can be done? As reported by John Nolte at Breitbart, “There is no way to shame Joe Biden, CNN, MSNBC, or the rest into acting like decent human beings. In their quest for absolute power over us, they see whatever furthers that goal as moral. So all we can do is get a concealed carry permit, learn how to use and carry a firearm safely, and be sure to carry it in the unlikely event you have to defend yourself.”

But Nolte also reminds us of this:

“Rank and file Democrats are not our enemies. They are our friends, family, co-workers, and neighbors. Get off Twitter. Turn off cable news. Don’t become what you hate.”’

But never forget that the power brokers on the Left are lying to us, and it has become quite apparent they don’t care if you get killed.