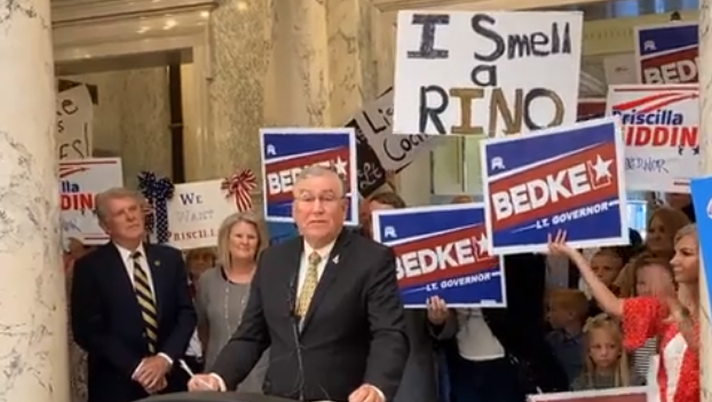 True Idaho News reached out to multiple State Legislators for comment after Rep. Scott Bedke announced he was running for Lt. Governor. Due to the current political climate within Idaho’s legislature, several legislators with whom we spoke asked to remain anonymous. Out of respect to our fellow citizens who work tirelessly at the State Capitol, True Idaho News is honoring their requests.

Idaho’s Speaker of the House, Scott Bedke (R-Dist. 27), has announced that he wants to be Idaho’s next Lieutenant Governor. In remarks made at the State Capitol on May 27, Bedke said he would bring his “values of family, faith, and hard work to the Office of Lieutenant Governor.”

Former Governor C. L. “Butch” Otter introduced Bedke at the Capitol, and a small crowd was on hand to hear his remarks. However, Bedke’s announcement was met with mixed reviews. Several citizens in attendance brought signs indicating that Bedke is a RINO (Republican in Name Only).

Senator Jim Rice (R-Dist. 10), who was holding a “Bedke” sign while Bedke gave his announcement, disagreed with the RINO label. “Scott has done a lot for the State of Idaho,” Rice said in an interview. “He was the central person on stopping the grab on our water rights in the Treasure Valley. That’s important to Idahoans. He’s consistent on cutting taxes, and much more conservative than people are giving him credit for.”

Other legislators disagreed, and expressed concerns about Bedke’s management style, describing him as a heavy-handed micromanager. He was even described by some of his colleagues as someone with a questionable temperament.

One State Representative said he wished not to be identified out of fear of being the House Ethics and Policy Committee’s next target. (We will refer to this person as Rep. “John Doe.”) John Doe described to True Idaho News what Bedke did when he was re-elected as Speaker for the 2021 – 2022 legislative session.

According to Rep. John Doe, after being elected Speaker, Bedke summoned certain people and asked whether they voted for him to be Speaker. If Bedke learned a person had not voted for him, and if that person had previously held a Committee Chair of Vice Chair position, Bedke removed that person from his or her position.

John Doe said, “Wendy Horman had challenged Bedke to be House Speaker. After he won, Bedke removed her as vice chair of JFAC [the Joint Finance Appropriations Committee]. He also removed Vander Woude.”

Other representatives confirmed to True Idaho News that Bedke continued removing people who didn’t vote for him until representatives in leadership positions told him to stop. It was reported that they didn’t want him removing senior people who had valuable knowledge for how to best run their committees.

Additionally, a different representative (whom we’ll call Rep. “Jane Doe”) told True Idaho News, “It’s no secret that to secure votes, promises were made.” When asked to clarify, Jane Doe said “vice chair positions.” When True Idaho News asked other legislators about this, they agreed that this is what occurred, but did not want to be identified.

“This kind of behavior completely contradicts what [Bedke] said in his announcement speech,” said yet another representative (whom we’ll call “Rep. Jack Doe”). “He talked about uniting the Republican Caucus, but his past behavior does not support any of that.”

“He has to be in complete control. He has his committee chairs continually text him. He’s a strongarm micromanager that you do not cross without consequences,” said Rep. Jack Doe. “He wants to know everything and direct everything. He does not like surprises.”

Rep. Jane Doe underscored what she thought was troublesome characteristic, stating, “As savvy as Bedke is, and as competent as he is, his emotional insecurities and passive aggressive nature create serious questions. Rather than move on as one does in politics, Scott tends to take things personally.”

Rep. Jack Doe stated that when Wendy Horman extended her hand to congratulate Bedke after he won the Speaker vote, he snubbed her by not shaking her hand. “The perception of him being a good manager is flawed by his emotional missteps,” said Rep. Jack Doe.

Other legislators stated they did not see this behavior. Rep. James Holtzclaw, (R-Dist. 20) told True Idaho News, “I think he’s a good man and a great leader. He always wants the best for Idahoans. I support him 100%.”

When asked about Bedke removing people from their chairmanships for not voting for him, Holtzclaw said, “I’m not the Speaker – We don’t know why people do different things. We could have a lot of conjecture to discuss the reasons he made certain decisions. We don’t’ know the complex decisions he has to make to run the state in the most beneficial way.”

Second term Representative Brooke Green (D-Dist. 18) is in the minority party, and although she noticed the changes, she offered no plausible reason why they were made. “When this new session started, there were new committee chairs, but I can’t attest as to how they got there.”

As to Bedke’s announcement to run for Lt. Governor, Green said, “With three people running you have a slate of candidates representing different views. I’m not going to give an endorsement. [Bedke’s] done his time and wants to step up. This will be a very interesting year.”

Another Democrat, Rep. John Gannon (Dist. 17) told True Idaho News, “I’ve gotten along with [Bedke], even though I disagree with him quite often. I think all three Lt. Governor candidates – Giddings, Malek, and Bedke – have always been courteous to Democrats, even when we disagree vigorously. I can say that for all three. One thing I have liked about the House is members still open the door for each other, and that’s important for government in general.”

Not all are impressed

Given the mixed reviews on Bedke’s announcement, it stands to reason that his leadership style should be examined more thoroughly. “Chairmanships are supposed to be based on seniority,” said Rep. Jack Doe, “but with Bedke, that only happens if you vote for Bedke as Speaker.”

Rep. Jane Doe added, “Historically, Speakers have required loyalty, but I don’t know if the practice of retribution was ever as prevalent in previous Speakers. I’m told that the first time [Bedke] ran for Speaker, people close to him had to talk him down because he was taking retribution too far. It’s troublesome that this was repeated at the start of this session. Those close to him had to talk him down from all the retribution. It is unfortunate that his service as Speaker has been marred by his desire for retribution.”