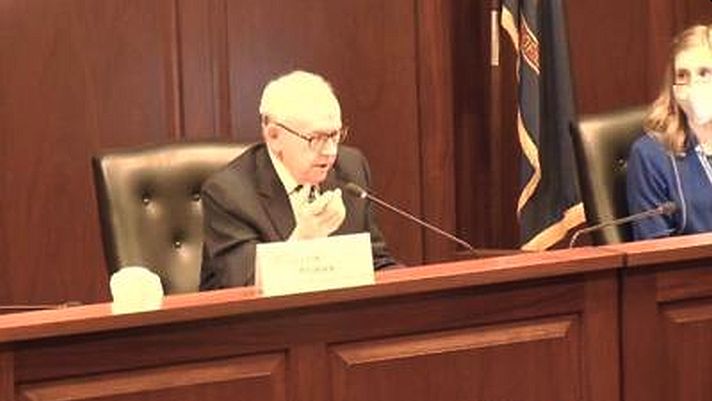 Much concern exists worldwide that soon it will be mandatory for people to receive the experimental spike protein injection commonly referred to as “the Covid vaccine.” Here in America, the government speaks with a forked tongue. On the one hand, they keep saying they won’t “force-vaccinate” anyone. On the other hand, there is increased talk of “vaccine passports,” long promoted by Bill Gates.

Idaho residents have reason to be concerned. During Anthony Fauci’s “two weeks to flatten the curve” deception, Idaho’s governor, Brad Little, dutifully strove to follow the “guidelines” set forth by the National Governors Association – a private club to which Little pays dues to belong.

Last week, New York Governor Andrew Cuomo, who happens to be Chairman of the National Governors Association, announced that New Yorkers will need a vaccine passport to return to normal activities.

With Cuomo’s draconian decision and so many corporations also choosing to (unconstitutionally) require vaccine passports, it’s likely that Governor Little may bow to peer pressure and do his best to fit with the rest of the members of his club.

Cuomo did say he will allow citizens to provide a negative Covid test in lieu of a “vaccine” passport, but the cost and the inconvenience of frequent testing will make this option a non-option for most. Besides, what’s to stop a lab tech from cycling a PCR test 36 times to ensure the test is positive – resulting in a citizen needing to quarantine for 10 – 14 days?

So, what are the choices that appear to be on the horizon? One can comply and accept the experimental spike protein injection, or one can be a second-class citizen, unable to engage in every-day behaviors such as traveling on mass transit (not so easy to do in the Big Apple), grocery shopping, attending sporting events, or even being able to work.

Sounds like the stuff of a futuristic, dystopian sci-fi, yet here it is in the land of the free and the home of the brave … new world.

Some might believe this kind of extreme demand can only occur in radical states like New York or California, but here’s the cold, hard truth: Vaccine passports are scheduled to be implemented nationwide, and they will happen quickly if the people of our nation don’t take a stand.

Some efforts have been made in Idaho to prevent the use of vaccine passports. Idaho’s House Bill 140 seeks to provide protection for at least some citizens by making it so the state cannot contract with companies that discriminate against people based on their vaccine status when it comes to employment.

Here’s how HB 140 works: If a company wants to contract with the state, then that company can’t discriminate in hiring or employment practices. In other words, it can’t refuse to hire someone because the person chooses to not have their immune system genetically modified to attack spike proteins.

HB 140 passed the House of Representatives on Feb. 23 with a 49-21 vote. Since that time, it’s been languishing in the Senate Commerce and Human Resources committee.

Why has it been sitting dormant for over a month? In fact, will it even be heard by the Senate this year? Not if Senator Jim Patrick gets his way.

Senator Patrick is Chair of the Senate Commerce and Human Resources committee. He has said he doesn’t want to hear the bill because St. Luke’s, St. Al’s and Blue Cross don’t like it. Kinda makes you wonder who Patrick thinks he works for.

Did these giant corporations elect him to represent them?

Here are just a few of the donations Senator Patrick has received over the past year and a half:

Those numbers may not look like much, but after examining Patricks’ financial disclosures, health care industries contributed more than 40 percent of Patrick’s re-election campaign fund.

It kinda begs the question: Are back door dealings going on between Patrick and these big medical and pharmaceutical companies?

It’s interesting that so many healthcare companies OUTSIDE of Idaho have an interest in Idaho state politics – and that they give money to the Chair of the Senate Commerce and Human Resources committee. Why would vaccine manufacturers Pfizer and Johnson and Johnson be interested in supporting Senator Patrick, plus other Idaho politicians? Are they looking to buy influence?

It’s a very real possibility: Big medical companies might get upset if the Senators they fund voted AGAINST an anti-discrimination bill (such as Idaho’s House Bill 140). Such a vote might affect the bottom line of these vaccine manufacturers and medical companies who profit greatly from administering these biologic agents.

Maybe this explains why Senator Patrick is hesitant to hear HB140. If he gives it a hearing, knowing how much public support there is for it, maybe it would pass and he would have to answer to some pretty big guns. He’d have some serious explaining to do to his big pharma and big medical donors, to our governor, and maybe even to the National Governor’s Association.

There are some major policy changes coming down the pike, and they are coming fast. These aren’t just any ol’ policy changes though. They will alter our entire culture and way of life. They will invade our privacy and restrict our freedom to make medical decisions for ourselves as well as our freedom of movement and general choice. Left unchallenged, these changes will codify discrimination against those who choose not to submit to being part of a phase 3 medical experiment.