Home National News Most Americans are Asleep – Can We Wake Up In Time? 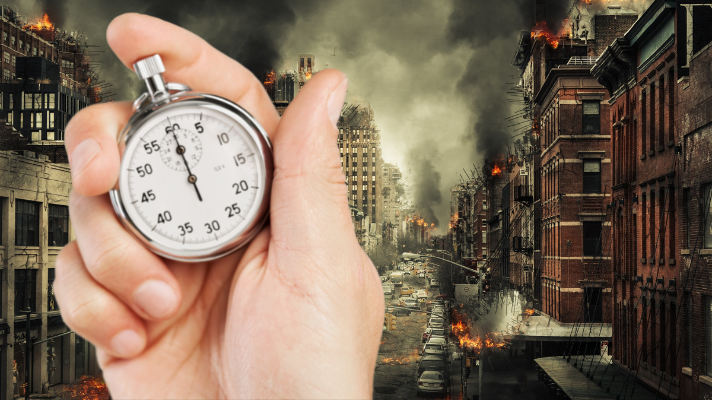 A thirst for “normal” – a return to the safe and familiar – is causing most Americans to miss the warning signs all around them. Too many of our fellow countrymen are asleep to the significance of what is happening politically, economically, socially, and militarily. They blindly believe that those working in government, education, and the media are acting with good intentions. The result will likely be shock and despair, because all around us are signs that things will come crashing down.

What we are experiencing is a controlled demolition of the American way of life. Those who want global power and control cannot do what they want so long as the people of America are free to ignore their edicts, so their solution is to dismantle America’s freedoms. Their technique for doing so? Systematically deconstruct the society using the legal profession, the media, education, entertainment, and even the church.

Law schools regularly produce professional arguers. Show law school graduates today something that is purple and they’ll take pleasure in gathering people to their cause as they seek out twisted definitions to convince us that purple is not really purple.  Rather than seek truth, these lawyers seek only to win – even if their cause is not true at all. Winning is their goal – not truth.

Media personalities regularly throw softballs questions at those who favor big government and globalist policies while they attack and smear those who wish to conserve the Republic. They downplay or outright ignore stories where violence is perpetrated by those on the Left, while magnifying actions of those seeking to restore liberty, even insignificant actions, often concocting motives out of thin air. The result? A negative emotional impression is placed on all things conservative.

Colleges of education no longer emphasize how to transfer knowledge and skills. Instead they focus their teaching on classroom management and that white male conservatives are evil. Public-school administrators pressure teachers to impress upon children the belief that conservativism is bad and government programs are good. Children are taught to trust “the system,” not their parents.

Once upon a time, television and movies conveyed respectable principles, setting the example that it is good to do what is morally sound, such as taking responsibility and showing respect. Those have been replaced with ideologies such as, “Do what feels good,” and “push back against those who value what came before us.” Practically every Hollywood company is involved it this, but of the largest culprit in this change is the Disney corporation, whose executive team now openly pushes for morally corrupt values to appear in everything they produce.

Perhaps one of the most disappointing showings in the culture war has been the church. Long ago, a selfish and vindictive politician by the name of Lyndon Johnson became incensed when pastors preached against him.  His response?  “The Johnson Amendment.”  This act removed a church’s tax-exempt status if the pastor preached for or against any politician. Before that time, the country stayed informed about the morals and principles of various candidates by hearing about it from pulpit. After the Johnson Amendment was passed, pastors shut their mouths to avoid having to pay taxes.

Pastors now ignore the teaching to give Caesar what is Caesar’s and give God what is God’s. As a result, they are selling their country down the river for 30 pieces of silver.

A desire to return to the good times

The points outlined above give evidence for why our culture has rotted to the point it is now falling apart, but that decay will be quickened by people being blind to what is going on around them and not doing an about-face.

Never before the advent of Covid did governors nationwide declare state-wide house arrest (what were called “lockdowns”). A quarantine is for when people are actually sick. Locking people in their homes without redress is house arrest. Most of us rationalized the “two weeks to flatten the curve” story, but due to a whipped-up frenzy of fear, hardly anyone pointed out the illegality of such executive edicts.  Then, even when two weeks extended into two months and more, people willingly followed these illegal orders. Guilt and shame were powerful tools used against us.

Masks were another insane policy. In nearly a dozen randomized controlled trials on the efficacy of masks in preventing viral transfer over nearly a dozen years prior to Covid, none of the studies showed any statistical significance for masks preventing viral transfer. Yet when the CDC put forth their mask recommendation, people all across the country bought the hype. People were shamed. They were prevented from acquiring goods and services. Some lost their jobs. Some people even went to jail for refusing to put a piece of paper over their faces.

This is tragic. The policy of mask mandates holds zero scientific validity. Now, with the truth widely available, one would think that this information would be widely acknowledged and mask mandates would disappear. But again, guilt and shame – and ignorance – are powerful tools.

Isn’t it amazing that people who want our country to operate in accordance with the Constitution are labeled domestic terrorists? At question: Who has the authority to assign these labels?  In reality, aren’t terrorists those who seek to subvert and dispense with Constitutional government?  The answer is yes, but when lawyers, the media, educators, entertainment, and yes, even some pastors are on the side of the true insurrectionists, they drive the narrative that gets spread over the population.

This past month Joe Biden gave a primetime speech in which he sounded more like Vladimir Lenin than he did George Washington. He castigated and smeared those who want Constitutional government, all while claiming that he stood for Constitutional government. Again, guilt and shame and ignorance remain powerful tools of the Left. One young man in North Dakota was run over and killed simply because a Democrat thought the young man was “an extremist.” The blood of that man is on the hands of Joe Biden and his cohorts throughout government and in the media.

Political liars are given a free pass

People who seek power often do so at the expense of truth. In my state of Idaho, Governor Brad Little openly lied to the state’s inhabitants when he said he did not lock down the state in response to “the pandemic.” The media gave Little a pass – ignoring the fact that hundreds of people lost jobs, businesses, and even life savings after Little placed the state in a lockdown status, unilaterally deciding which residents were “essential” and which weren’t.

They also failed to mention the Idahoans who committed suicide because of Little’s draconian actions.

Then there’s Scott Bedke, the long-standing Speaker of the House in Idaho. Bedke ran for Lt. Governor, claiming in his campaign literature that his opponent, the very conservative Priscilla Giddings, was a liberal and that he, Bedke, was a conservative. Again, the media conveniently ignored Bedke’s “misinformation.”  Even Democrat lobbyists at the statehouse have confided to this writer that Bedke is a corrupt politician, but despite Bedke’s and Little’s lies, the electorate voted for them anyway.

The media is complicit in keeping the truth from the electorate because, as stated earlier, they are on board with changing America’s form of government.

Warning signs all around

Those seeking to take down America are operating with a full-court press. It’s so pervasive that many people have all but given up. Consider the following:

Nature abhors a vacuum. In the absence of the morals and principles spelled out as necessary by our nation’s founders, unelected and self-described “elite” from organizations such as the World Economic Forum and the World Health Organization are stepping in to dictate the direction of our country.

At question – will the American people wake up in time and put a stop to it before they succeed in their goals?