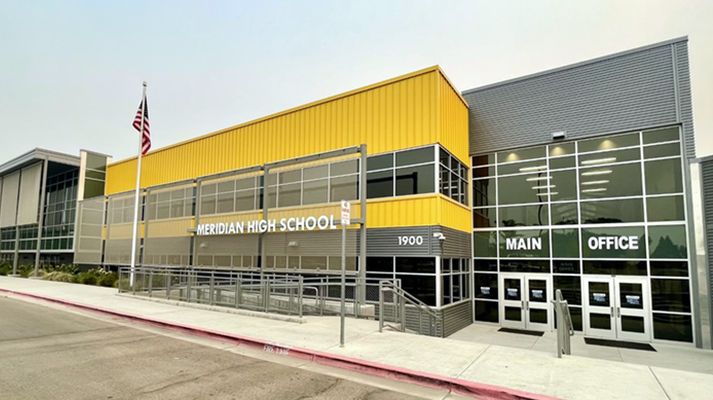 Despite filing a religious exemption with the school, a first-year student at Meridian High School was pulled out of class on Tuesday morning, Sept 21, for not wearing a mask. Four adults, assumed to be school administrators, escorted the student to a conference room, gave him three options, and then said if he returned to school without a mask again it would be considered “a disturbance” and they would call Meridian police.

The student’s parents, Pete and Jessica Barajas, considered this bullying, and shared the story with True Idaho News. The student’s mother, Jessica Barajas, said, “I contacted the school by phone and also by email, but they have not gotten back to me to tell me who these people are who threatened to call the police on my son.”

The student says he arrived to class for the 2nd period, and his teacher told him he had to wear a mask. He said he had a religious exemption, so the teacher contacted the vice principal.  The vice principal contacted was Ms. Katie Shoup.

Barajas said Shoup walked her son around the halls, “trying to find a grey area” so her son would wear a mask. When he held to his religious convictions, Shoup returned him to his class. Ten minutes later, four adults in masks arrived at the classroom and escorted the student to a conference room.

“He’s been attending Meridian High only two weeks,” said the student’s father, Pete Barajas. “He doesn’t know who these people are,” referring to the four masked adults. The only person the student recognized among the four was Ms. Shoup.

After the student was seated with four masked adults around him, he was given three options:

“They were clearly trying to intimidate and bully him,” said Mr. Barajas. “Then they told him if he came to school again without a mask they would say he was creating a disturbance and call the Meridian police.”

True Idaho News reached out to Katie Shoup, the Freshmen Assistant Principal at Meridian High School, with a request for comment from the school about this incident. Neither Shoup nor the school has responded.

The Barajas family cited Article 1, Section 4 of the Idaho Constitution as their authority for the religious exemption:

Section 4.  GUARANTY OF RELIGIOUS LIBERTY. The exercise and enjoyment of religious faith and worship shall forever be guaranteed; and no person shall be denied any civil or political right, privilege, or capacity on account of his religious opinions.

Mr. Barajas said he shared this Constitutional article with Shoup, who said she agreed, but then said the school’s policy was that religious exemptions are not honored, only medical exemptions.

Not the First Harassment – Intent to Withdraw

Mrs. Barajas told True Idaho News this is not the first time her son has been singled out, intimidated, and harassed by school faculty and administrators. “For example, a substitute teacher harassed my son about him not wearing a mask. I contacted the school to find out the name of the substitute, and they will not give it to me,” said Mrs. Barajas.

“This has been an escalation of events, and my son was quite shaken up by what happened today. No more. To put it politely, this is no way to treat students. I will be withdrawing my son from the West Ada School District.”

Schools, businesses, and governmental bodies continue to implement mask policies, despite nearly a dozen gold-standard studies showing masks to be ineffective at preventing viral transfer among people. A randomized, controlled mask efficacy study of 6,000 people in Denmark published in the peer-reviewed Annals of Internal Medicine found no statistical evidence that wearing masks made any difference in viral transfer.

Professors from Oxford University weighed in on the findings by publishing an article in The Spectator. Carl Heneghan, professor of evidence-based medicine and director of the Center for Evidence-Based Medicine, along with Dr. Tom Jefferson, honorary research fellow at the Center, stated, “In the end, there was no statistically significant difference between those who wore masks and those who did not when it came to being infected by Covid-19.”

The doctors also said, “Nine other trials looking at the efficacy of masks (two looking at healthcare workers and seven at community transmission) found that masks make little or no difference to whether you get influenza or not.”

Additionally, Denis G. Rancourt, Ph.D, conducted a meta-analysis on mask research, which resulted in his paper, Masks Don’t Work: A Review of Science Relevant to Covid-19 Social Policy. Regarding his analysis, Rancourt said, “If you use only proper studies – randomized, controlled trials with verified outcomes – they all unambiguously say that there is no statistical evidence of a benefit in terms of reducing risk of getting a viral respiratory disease. They all say it.”

After his father picked him up from school, the student wrote his recollection of the events (transcription below):

TRANSCRIPTION: I arrived to school without a mask. About 10 minutes in, I was pulled aside and asked to wear a mask. When I refused, she emailed Ms. Schoop [SIC]. I was in class for another 10 minutes when Ms. Schoop came in and she took me outside so we could talk. We did about 3 laps around the 1st floor and talked about my views and whatnot. After that, I went back in class. About another 10 min go by and I am pulled into the hall by 4 administrators. They escort me to a conference room and tell me I could either wear a mask and go back to class, get in-school suspension, or leave and get picked up. They then threatened me with the police saying if I would be a disturbance to the class again like this, they would get the Meridian Police involved.