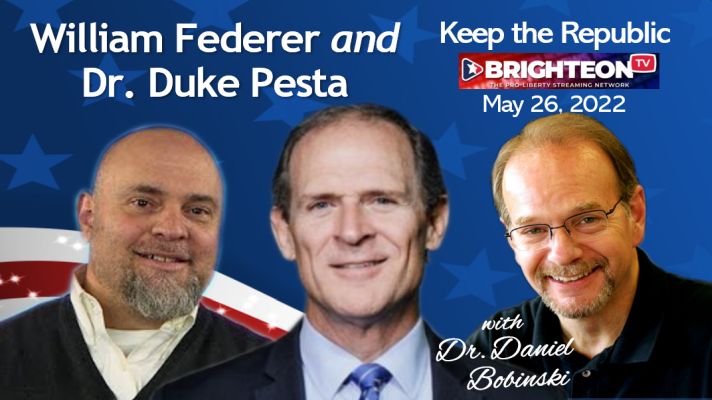 In a dynamic show on May 26, Keep the Republic host Daniel Bobinski first discusses the school shooting that occurred in Texas this past week. The words of those on the Left are predictable – more gun control is needed. Yet several days after the shooting, video emerged showing that dozens of police stood around not doing anything while children were being slaughtered inside. Parents were furious that the police were taking no action and discussed among themselves storming the school and taking out the shooter.

It was only 50 years ago in this country that public schools had shooting clubs and weapon safety classes. Yes, classes on shooting and gun safety were taught in America’s public schools. Today, solid conservative legislators regularly attempt to pass laws making it legal for teachers to be trained and carry concealed within the school, but liberal legislators regularly kill such bills.

Perhaps the true problem is that America is being fed a regular diet of lies, and truth is being shoved aside to make room for feelings.

To discuss this further, Bobinski brought on historian and author William Federer, who presented a brief review of governments and why America’s government is unique. Federer pointed out that, throughout history, the most common form of government was a king, and that kings were the one with the weapons. America’s founders flipped that model, so that the citizens were “the king,” and everyone was encouraged to have weapons so that our government would not get out of control.  Bottom line, America was designed to operate much like the nation of Israel when they first entered the Promised Land and had no king for 400 years (until they asked for one). Everyone was armed, they were taught the law, and they were responsible for following God and protecting their families.

Regarding the school shooting, Federer said, “Instead of a hardware problem we have a software problem.”  He said that “We’re teaching [our kids] that there’s no God, there’s no right, there’s no wrong; that they can feel they’re a boy today and a girl tomorrow – they have no borders; no guidelines. These kids are taught that life is worthless – that there’s no point to their life. That they can kill a baby in the womb and that human life is cheap. And then we’re shocked when they act out what they’re taught.”

In the second half of the show Bobinski brought on Dr. Duke Pesta, a professor at the University of Wisconsin who, because he’s tenured, can boldly speak on the true nature of education in this country without being fired.  Bobinski asked Pesta to comment on a TikTok video of an elementary school teacher saying that all classroom topics are political. Pesta responded by saying, “This is Critical Race Theory nonsense,” Pesta said. “When students become part of Socialist movements or become part of the Socialist party, the are definitively taught that nothing is apolitical. In fact, political discourse is the real discourse that matters.  Consequently, everything is ‘revolution.’”

Pesta also reference Bill Ayers, a member of the militant terrorist group, The Weather Underground. Ayers eventually became a professor of elementary education, and at his retirement, he boasted that he’d taught thousands and thousands of young teachers that, “The place for Communism in America is the elementary school classroom.”

Keep the Republic is a weekly TV show airing on Brighteon.TV and also the Brighteon Roku Channel. The show can be viewed live on Thursday afternoons at 4pm eastern / 2pm mountain.

The entire Keep the Republic show featuring William Federer and Dr. Duke Pesta is available on the Brighteon archives page or can be viewed here:

Support the work at True Idaho News by visiting our support page!