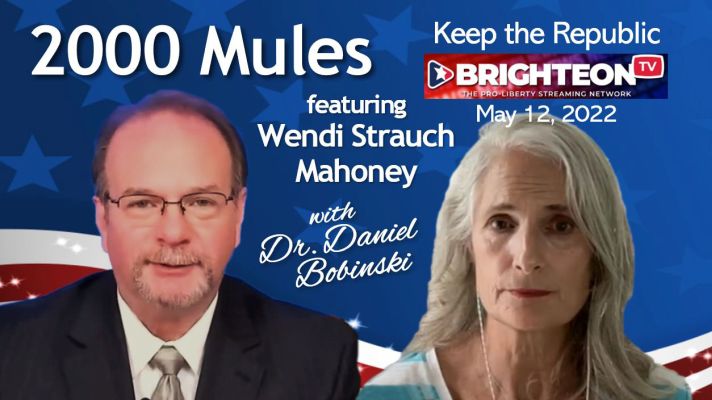 Keep the Republic is a live show hosted by True Idaho News editor Daniel Bobinski each Thursday afternoon on Brighteon.TV. On May 12, Bobinski invited UncoverDC investigative journalist Wendi Strauch Mahoney on his show to discuss her article, 2000 Mules And True the Vote Debunk AP Hit Piece. The show featuring Mahoney can be seen via this link or by clicking on the embedded video below.

Filmmaker Dinesh D’Souza recently released a documentary based on research compiled by True the Vote and OPSEC, two companies that analyzed data to prove election fraud occurred in the 2000 presidential election on a massive scale. Even before the movie hit the screens, the Associated Press attempted to smear the documentary’s findings by criticizing anything it could. UncoverDC journalist Mahoney looked at the AP’s accusations and easily debunked them.

“This geofencing technology has been around only a few years … [and] it’s basically digital DNA,” said Mahoney. She stated that the new technology allows for tracking individuals by their phone’s specific signals. As explained her UncoverDC article, it’s the same technology the Department of Justice used to track people in Washington DC on January 6 of last year. Mahoney points out that for the AP to suggest the technology is questionable, the DOJ would have to disavow its use.

A Rasmussen quote appearing in Mahoney’s article says, “Using state of the art technology, the film convincingly makes the case that the 2000 presidential election was perhaps the most unsecure election ever, and was stolen from President Trump.”

The 2000 Mules documentary cost more than $1 million to produce, and the film grossed that amount in just the first four days of its release.

The term “mule” is applied to someone who visited a Non-Governmental Organization (NGO) office – where harvested and fake ballots were stored – and then distributed those ballots in small numbers to voter drop boxes. Mahoney said that method was used to minimize attention that false ballots were being placed in the drop boxes.

Mahoney explained that to make the study, mules needed to visit a NGO office at least five times and physically visit at least 10 different drop boxes.  Such a pattern clearly indicated intent, and thus minimized to nearly zero any false inputs to the data aggregated for the investigation. Mahoney also said that data was collected and analyzed from Arizona, Michigan, Wisconsin, Pennsylvania, and Georgia, the so-called battleground states that magically threw votes into the Biden column.

Clearly, as shown in the movie, enough harvested / fake ballots were placed in drop boxes to change the results of the presidential election.

Constitutional Conservatives Must Get Involved In Government

Mahoney’s appearance on the May 12 Keep the Republic episode happened in the second half of the May 12 show. In the first half, Bobinski opened by saying it’s time for Constitutional Conservatives to get active and elect true Conservatives to office. He referred to a presentation by Dr. Alan Keyes who spoke at the Educational Truth Summit in Boise on May 7, and summarized the crux of Keyes’ speech as, “Unless this country turns itself around and gets refocused on the righteousness of Scripture, this country is doomed.”

Bobinski pointed out that “[America] is the first country in the history of the world that flipped the way government worked.” He also said that in all of history, “[government] has always been top down ever since the beginning of time. Might makes right … America was the very first country to flip that.” Therefore, when people like Joe Biden start hyping the “New World Order,” what they are striving to re-install is an old-world system of top-down authoritarianism. What they call a “New World Order” is really an “Old World Order.”

Bobinski also spoke about the current and coming food shortages and how it’s the World Economic Forum that’s now spearheading the push for global governance. He also pointed out how Republicans in Name Only – which some call imposter Republicans – are working hard to smear true Constitutional Conservatives.

Another topic covered by Bobinski in the first half of the show was investments made by Bill Gates in multiple areas, such as mRNA technology, vaccine production, fake breast milk and fake meat. Bobinski pointed out that Gates presses for countries to buy those things without telling them he profits by their purchase. And, with the proposal of a Misinformation Czar by the Biden Administration, Bobinski said it’s equally curious that Gates is now amassing 3,000 people to write positively about “vaccines” on social media.

Closing out the first segment, Bobinski repeated a warning he’s been making for several weeks – that the World Health Organization is meeting for a conference in June that may create a “treaty” that will usurp the national sovereignty of its member states. The treaty would be just another step toward top-down authoritarianism under the guise of health.

We depend on readers support. You can support the work at True Idaho New here.