Home National News Keep the Republic: A Live Report From the People’s Convey Plus Updates from Dr. Rashid Buttar and Clay Clark 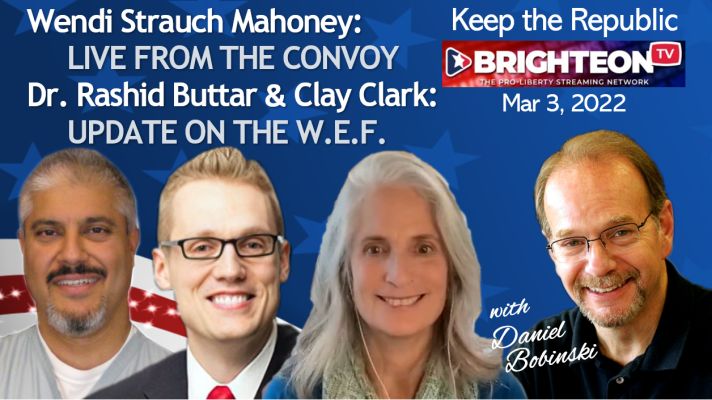 On March 3, UncoverDC investigative journalist Wendi Strauch Mahoney appeared on Daniel Bobinski’s Keep the Republic TV show live from the cab of a truck in the People’s Convoy (view the show here). Mahoney has been with the convoy since day one, filing video and written reports and often getting only a few hours of sleep each night.

With over 400 trucks, it takes several hours for the convoy to get rolling each morning. “We’re doing about 35 miles an hour right now,” she said. “We usually lift off at about 8:30 in the morning. It takes us about two or two-and-a-half hours to file out of the place where we’re parked overnight because they start real slow and they gradually increase the speed. If they don’t keep the speed pretty constant, it causes a slinky effect and it can cause accidents.”

“The logistics on this are tremendous,” Mahoney said. “We’ve got scouts going ahead, checking out security wherever we’re staying, seeing if there’s enough parking. They check all of the trucks and the trailer beds – we’re trying not to have any bad actors involved. Honestly, we’ve had very little friction on the road – it’s been an amazing experience.”

Mahoney’s article from the road, “The People’s Convoy Day 8: A Day of Rest And Reflection” can be found here.

Following his talk with Mahoney, Bobinski elaborated on an UncoverDC article by Michelle Edwards on how the World Health Organization (WHO) is planning a global governing instrument, underscoring the fact that such a document is a direct line to global dictatorship.

In the second half of the show, Bobinski was joined by Clay Clark and Dr. Rashid Buttar, discussing how Bill Gates has joined with the WHO in creating a subdermal method of storing data, and how globalist efforts are being pushed by Klaus Schwab, head of the World Economic Forum.

Clark is the founder of the Re-Awaken America tours, which regularly feature speaker such as Lt. Gen. Michael Flynn (Ret.),

The March 3 show featuring Mahoney, Buttar, and Clark can also be viewed here:

If you like what you see on True Idaho News, please support our work. Visit TrueIdahoNews.com/Support. Thank you!