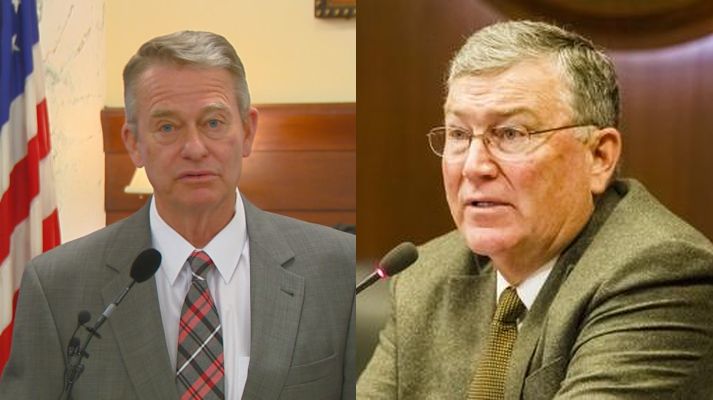 At least twice now, upon leaving the state, Idaho’s Governor Brad Little has stated that he has not authorized Lt. Governor Janice McGeachin to act on his behalf, most recently doing it on Facebook. Guess what? Brad Little has zero authority to operate contrary to the Idaho Constitution, which he swore an oath to support. As such, his Facebook comments on Oct. 5 are nothing more than a political stunt. And with Scott Bedke also seemingly ignorant of the Idaho Constitution, his comments are also a political stunt. Additionally, by releasing his personal comments on official House of Representative letterhead, he may have set himself up for an ethics violation.

There’s a lot to unpack here. Let’s start by looking at what Governor Little wrote on his Facebook page on Tuesday, Oct. 5:

“I have not authorized the Lt. Governor to act on my behalf”?

The Lt. Governor does not need Little’s authorization to act as Governor in his absence, she has full authority to do so under the state’s Constitution. Article IV, Section 12 says:

SECTION 12. LIEUTENANT GOVERNOR TO ACT AS GOVERNOR. In case of the failure to qualify, the impeachment, or conviction of treason, felony, or other infamous crime of the governor, or his death, removal from office, resignation, absence from the state, or inability to discharge the powers and duties of his office, the powers, duties and emoluments of the office for the residue of the term, or until the disability shall cease, shall devolve upon the lieutenant governor. (emphasis added)

Nowhere does it say a Lt. Governor needs permission from the Governor to act as Governor when the Governor is out of state. And when Little gave his oath of office, he swore to “support the Constitution of the State of Idaho.”

Little served for 10 years as Lt. Governor under Butch Otter, so he should know the position’s Constitutional duties and responsibilities. Assuming he remembers what he may have read, for him to put those comments on Facebook was nothing more than a political stunt, designed to insinuate she needs his permission to act as Governor when she clearly does not. That is, unless both Brad and the current White House occupant are on the same path and taking the same meds.

The Purpose of Executive Orders

The role of a state governor in our Dual Federalist system is to serve as the executive officer of the state and execute the laws of his or her state. In that role, he or she has authority to write executive orders that direct the actions of people working in offices, departments, and political subdivisions that operate under the executive branch. He or she has no authority to mandate actions of the state’s citizens. The creation of laws for citizens is a function of the legislative branch.

It is the same at the federal level. The President of the United States cannot create laws or issue executive orders that direct the action of citizens. He or she can only draft orders that direct the behavior of employees in agencies, offices, and departments operating under the executive branch. This is why it’s unconstitutional for Joe Biden to create an executive order for OSHA to implement fines for organizations of 100 or more employees if some of those employees remain unvaccinated.

No department, agency, board, commission, or other executive branch entity or official of the State of Idaho shall:

According to Brad Little’s Executive Order 2021-04, all executive branch entities are restricted from requiring proof of “vaccine” and cannot be denied services for not having received one.

Idaho’s Education Institutions Are Under the Executive Branch

Idaho’s State Constitution outlines only three branches of government: Legislative, Executive, and Judicial, and Idaho’s educational institutions do not fall under the Legislative or Judicial branches – they exist under the Executive Branch.

To be clear, the State Superintendent of Public Instruction is an Executive Branch Office, and the State Board of Education is appointed by the Governor. The legal team at FindLaw is also clear about the role of state government in education, saying “Each school district is administered and financed by the community along with that district’s state government.” (emphasis added)

Therefore, in accordance with Little’s Executive Order 2021-04, students who are accessing educational services in the state of Idaho cannot be required to prove “vaccination” status and cannot be denied services for not being vaccinated.

The problem? Some state-funded education entities in Idaho are demanding proof of vaccination, and Brad Little has not been enforcing his own Executive Order.

On Tuesday, Oct 5, with Little out of state, Acting Governor Janice McGeachin signed Executive Order 2021-13, “Banning Vaccine Passports and Mandatory Testing.” In that order, McGeachin clarified that public educational institutions are part of the executive branch, and included them by name. Her order states:

No department, agency, board, commission, or other executive branch entity or official of the State of Idaho, including but not limited to the Idaho State Department of Education and all public schools, colleges, and universities shall:

Newspaper journalists who do not understand Idaho’s Constitution are doing their level best to misrepresent McGeachin’s actions.

A story in Boise’s main paper that was picked up by papers across the country was titled, “Was that legal? McGeachin’s vaccine executive order raises constitutional questions.” The article quotes a few Idaho House Democrats who claim McGeachin’s Executive Order was illegal because it did not enforce existing law.

First, this claim is contrived, because if they were truly concerned, they would have made the same accusation regarding Little’s April 7 order banning vaccine passports. Second, McGeachin’s order told Executive Branch entities (including school districts) that they could not deny access to state-funded services by creating what amounts to a law (vaccine mandates).

A Washington Times headline was, “Idaho Lt. Gov. Janice McGeachin grabs power while the governor is away.” Grabbing power? Quite the opposite. McGeachin was giving power back to the people, allowing them the freedom to vax or not vax.

In an Oct. 5 “#me too” letter penned by the man who wants to be elected Lt. Governor, House Speaker Scott Bedke is another person who does not seem to understand the responsibilities of the position. In a letter released by the Speaker, he wrote,

“While the Lt. Governor has an important role to play to serve as president of the Senate and follow the guidance of the Governor, her actions today are the exact kind of overreach that does not represent Idaho and Idahoans. This is a complete grandstand and abuse of her political office in an attempt to influence voters.”

Like Little’s Facebook post, Bedke’s letter is also a political stunt, because apparently he doesn’t understand the Idaho Constitution. And to restate the obvious, by issuing her executive order, Acting Governor McGeachin was most definitely representing the will of the people, unlike Bedke who seems hell bent on brokering backroom deals and appointing committees.

As a side note, Bedke tried to amplify his stunt by releasing his letter on Idaho House of Representatives letterhead. The House did not meet to discuss this. No caucuses were held. Therefore, delivering a personal communique on official House of Representatives letterhead is in violation of House rules, and I would suggest Bedke be brought up on a House ethics violation.

Idahoans Want Their Freedom – Little and Bedke are Not Delivering

While Idaho’s citizens continue to lose their savings and have their lives turned upside down due to vaccine mandates, Bedke took his sweet time to “appoint a committee” after his attempts at backroom deals hit a snag. Sadly, some legislators say his committee will only put forth bills that Bedke has approved. This is hardly how representative government is supposed to work.

And Brad Little? He bragged in his Facebook post about working “closely with the states of Arizona and Texas to determine the most impactful way to support their mission, and I sent a specialized team of Idaho State Police troopers to support drug interdiction efforts at the border.”

Really? Readers should know that in July, Little sent FIVE ISP troopers to Arizona for 21 days.
The New York Post reported in July that illegal border crossings were on pace to top 1 Million people over the first seven months of the year. And Little sends five people for three weeks? That’s like using a dixie cup to drain the Titanic. Sending a mere five people was just another political stunt so he could say he did something.

Idaho’s governor talks big, but he lives down to his name – he does little. And it sure seems like both Little and Bedke are not only ignoring the clear language of Idaho’s Constitution; they are more interested in slick political stunts designed to discredit the legal actions of the state’s Acting Governor than truly helping the citizens of Idaho.