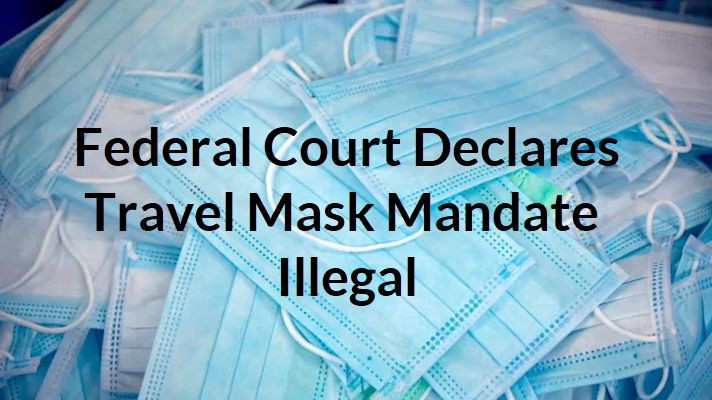 In a huge victory for liberty and the rule of law, the federal government’s Travel Mask Mandate was struck down in a federal lawsuit brought by the Health Freedom Defense Fund (HFDF). According to a press release from HFDF, an organization based in Idaho, “The decision, by a U.S. District Court judge in Florida, invalidated the order by the federal Centers for Disease Control and Prevention (CDC) requiring that masks be worn on airplanes, trains, buses, and other travel conveyances and in transportation hubs.”

Leslie Manookian, President of HDFD, said, “Without any public comment, or serious scientific justification, CDC bureaucrats imposed a sweeping Travel Mask Mandate applying to every American over the age of two.” Manookian continued, “There are laws that set boundaries for federal agencies to protect individual freedom and the Court clearly found that CDC exceeded those limits.”

The lawsuit was brought by HFDF and two residents of Florida, alleging that the CDC exceeded its statutory authority and failed to abide by the federal Administrative Procedure Act.

Manookian stated, “Unelected officials cannot do whatever they like to our personal freedoms just because they claim good motives and a desirable goal.”

According to the Brownstone Institute:

This means that for all this time, passengers and transportation employees have been forced to follow a mandate, enforced with criminal penalties, that has been illegal. Countless millions have been threatened, victimized, hectored, barked at, thrown off buses, trains, and planes – with even young children forcibly muzzled as their parents are denounced – when in fact, it has been the federal government itself that has been violating the law.

Alaska, American, Southwest, Delta, and United Airlines all announced within hours that they would no longer enforce the mask mandate. They are effectively gone, following 16 months of brutal enforcement of an edict now declared to be illegal.

Health Freedom Defense Fund is a 501(c)(3) non-profit which seeks to protect and advance health freedom, educating Americans on informed consent, advocating for human rights and bodily autonomy for all people, and legally challenging unethical mandates, laws, and policies when necessary. For more information visit www.healthfreedomdefense.org.