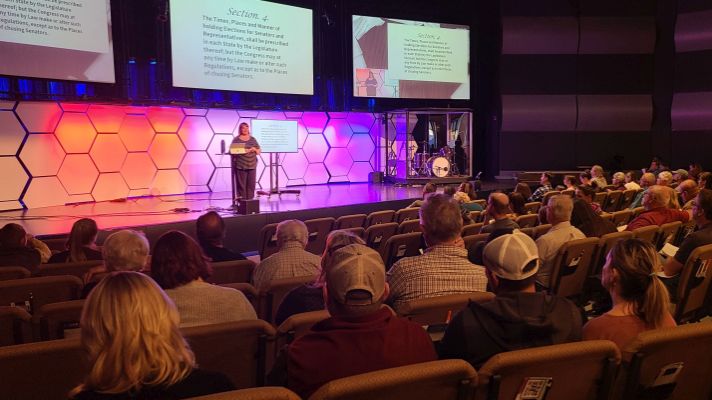 A complete course on the U.S. Constitution is now available on the True Idaho News Rumble page, and can be viewed by anyone for no cost.

Jeralynne Bobinski, the facilitator, is an in-demand educator with a gift of making concepts easy to understand. Jeralynne agrees with John Jay, the first Chief Justice of the U.S. Supreme Court, who said that all citizens should study the Constitution so that when their rights are violated, they will be able to defend and assert their rights. Therefore, Jeralynne makes herself available to “wherever there is a venue and an audience” to teach on the U.S. Constitution.

Last year, Foothills Christian Church in Boise asked Jeralynne to deliver her material, and videographer Steve Nelson stepped up to videotape the classes. The classes are available for anyone to watch, and no enrollment fee is charged. However, people finding value in the course can bless Jeralynne with a donation using the link embedded in the show notes of each video (donation link).

Session descriptions and links to each session are listed below:

True Idaho News and Meadowlark Academy are both subsidiaries of Shadowtrail Media, LLC. Jeralynne Bobinski does not charge for these classes. If people find Jeralynne’s course valuable and would like support her work, they are encouraged to make a donation. Simply write “For Meadowlark Academy” or “For Jeralynne” in the ‘Write a note” section of the donation page.

Donations can be made here: https://www.paypal.com/donate/?hosted_button_id=XXJVC6WU7K77E

To inquire more about this course or to secure Jeralynne for a speaking engagement, contact her through trueidahonews@protonmail.com.