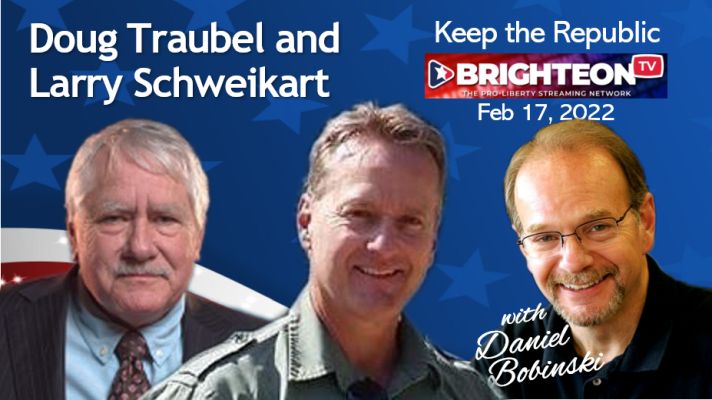 The Keep the Republic show for February 17 included an insightful interview with Doug Traubel, author of Red Badge: A veteran police officer’s commentary on the Marxist subversion of American Law Enforcement and Culture, on what it means to be a Constitutional sheriff in today’s eroding culture. Following that, UncoverDC writer Larry Schweikart and host Daniel Bobinski elaborated on topics from Schweikart’s latest column.

First, Bobinski examined the current situation in Canada, where Prime Minister Justin Trudeau has doubled down on his mandates and even confiscating money donated to truckers participating in the truck convoy. But is he going too far? Even the Premier of Ottawa is now saying “enough,” and media outlets are suggesting that Trudeau’s house of cards may be crumbling.

Doug Traubel discusses the role of a sheriff

In the discussion about what it means to be a sheriff, Traubel pointed out that police departments essentially serve as the security force for a municipal corporation – a city – and police chiefs serve at the pleasure of mayor. On the other hand, a sheriff swears an oath to uphold his or her state constitution and the U.S. Constitution, and their job involves protecting people’s rights.

In one example given by Traubel, a mayor may tell his or her police chief to stand down and give rioters room to riot. A sheriff is under no obligation to follow such an order, because a sheriff is beholden to the Constitution, not a person. Therefore, even if a mayor wants to let rioters riot, a sheriff can take his or her deputies into such a situation and restore law and order.

Larry Schweikart elaborates on issues of the day

In the second segment, Bobinski and Schweikart elaborated on multiple aspects of Thursday’s column, The News of Today is the History of Tomorrow. Included in that conversation:

Ukraine! It appears the Biden administration is talking a big talk, but it may be Wag the Dog scenario. Also: What will the outcome be in Canada? Is the real estate market ready to crash? Are Democrats in America collapsing? What’s the danger of Tulsi Gabbard? Is Kari Lake a good pick to be AZ governor?

The two also discussed how race relations are taking a step backwards, fostered by a Communist / Socialist push to divide America.

Keep the Republic is a live weekly show on Brighteon.TV at 2pm mountain, hosted by True Idaho News editor Daniel Bobinski. The Feb. 17 show featuring Doug Traubel and Larry Schweikart can be seen here on the Brighteon.TV channel. It can also be viewed right here: