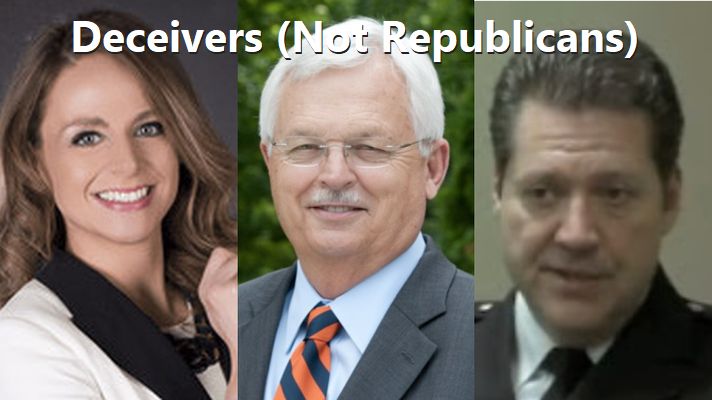 Editor’s note: The amount of outright LIES, slander, and smears by unprincipled “Republicans,” to include politicians and former law enforcement officers in this state, is beyond disgusting. One must wonder why we’re seeing such a huge push across the board against Constitutional and Christian conservatives. One thing is certain: these former police chiefs, former sheriffs, and big government Republicans do NOT have Idahoans’ freedom and liberty in mind. They may talk a big talk, but the positions of these imposter Republicans fail the Constitutional sniff test. It is sad, but now necessary, that members of our community must write the words you’re about to read. Please share far and wide the following guest editorial from John Crowder, publisher of the Pocatello-Chubbuck Observer. This article originally appeared on that website, and can be found here.

RINO (Republican in Name Only) Republicans across Idaho, lacking policy positions that Idahoans support, are being propped up in the final days of the May Primary election by smear campaigns railing against conservative candidates who support the Constitution and who vote for reducing the size and spending of state and local government.

Backers of the big spending, big government RINO’s are making outrageous claims about the real conservatives running to win Republican party nominations in races at all levels, even local races.  At the same time, these same Establishment candidates are touting their, ‘conservative credentials.’

We’re all used to seeing absurd attacks from the extreme leftists of the Democrats.  But Republicans?  Sadly, those Republicans who are pushing the growth of big government, excessive spending, and a denial of individual rights have also decided to add dirty campaign tactics to their playbooks.  Messages are going out accusing Christian men and women who support individual rights and freedom of supporting rapists.  Support for the U.S. Constitution is deemed ‘extremist.’

Why do these slimy politicians and their allies’ resort to these tactics?  It’s because they want to hold on to power at all costs.  And, in a close race, if they can put doubt in the minds of conservatives and discourage even a small percentage of them, causing them not to vote or work to help elect a good candidate, it can change the outcome of a race.

Voters, don’t be fooled by the sleazy tactics being deployed as we near election day.  When you see wild accusations being tossed around, ask yourself if they pass the smell test.  Is somebody running for office to reduce the size of government, provide you with tax relief, and protect your freedoms really an ‘extremist?’  Are Christian legislators who’ve been working to remove pornography from classrooms and libraries really going to support sexual assault?

If we didn’t have enough reasons to send the establishment Republicans and their big money backers packing, this is one more.  On election day, vote for the true conservatives, those standing up for the average Idahoan.  They’re likely the candidates suffering the most outlandish accusations.