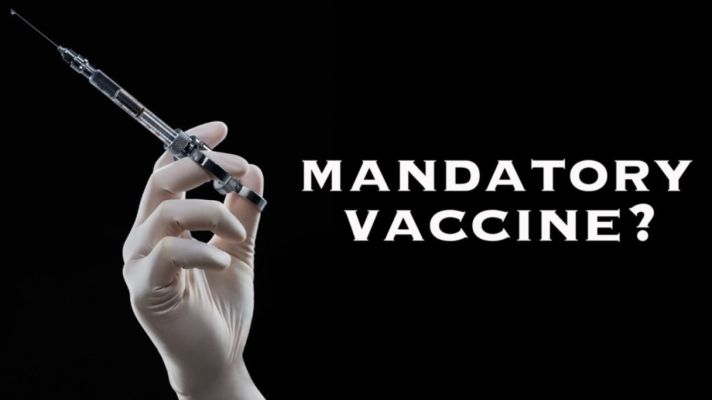 The three major medical organizations in Idaho have announced that all their employees must receive a Covid “vaccine” by September 1 of this year or lose their jobs. The overarching problem is that this order may violate federal law. As reported in The Defender, a publication of Children’s Health Defense News, “Under federal law, employers and universities cannot legally mandate COVID vaccines because they are unlicensed Emergency Use Authorization products which are, by definition, experimental.”

What many do not know is that the mRNA injections commonly called “Covid Vaccines” are not approved by the Food and Drug Administration. These injections are given under an “Emergency Use Authorization,” or EUA.

The Defender article goes on to say, “EUA products are by definition experimental, which requires people be given the right to refuse them. Under the Nuremberg Code, the foundation of ethical medicine, no one may be coerced to participate in a medical experiment.”

Sadly, despite EUA products being, by definition, experimental, many health care providers are proffering the notion that because safety trials have begun, the drugs are no longer experimental. This is patently false and should be considered medical misinformation.

FDA Warnings from October of 2020

What is disconcerting about those leading Idaho’s medical organizations is they appear to be in denial about the known dangers associated with these injections. In a presentation given by the FDA on October 22, 2020, attendees were shown a long list of injuries that would likely result from mRNA ‘vaccines.’  Among those are Guillain-Barré syndrome, convulsions and seizures, strokes, acute myocardial infarctions (heart attacks), and deaths.

Tragically, Dr. Jon Getz, a skilled surgeon in the St. Luke’s system died this past week of a heart attack. Personnel at his office stated they believed Getz had recently received a Covid vaccine, but could not confirm that at the time of inquiry.

Many people working at Idaho’s top three medical systems believe their employers do not have the right to mandate people take a yet-unproven vaccine when the long-term effects of this new technology is completely unknown. It is estimated that 30 percent of the employees from St. Luke’s, St. Alphonsus, and Primary Health are planning on quitting rather than be forced to take the experimental messenger RNA injection.  This after a similar percentage of employees were laid off due to lack of patients during the shutdowns in 2020.

This is Going to Hurt Idahoans

When contacted for comment, Rep. Priscilla Giddings (R-Dist. 7) was concerned about the ability of Idahoans to receive adequate care. “This is going to hurt Idahoans,” she said. “It’s sad, because House Bill 140 would have stopped this.” Giddings is the representative that authored House Bill 140, which would have prevented any organization doing business with the State of Idaho to practice medical discrimination.

HB 140 passed the House with a 49-21 vote, but Senator Jim Patrick, Chair of the Senate’s Commerce and Human Resource committee, put the bill in his drawer and refused to let his committee hear it. As reported by Esther Tilly in a True Idaho News Op-Ed on April 3, Patrick “doesn’t want to hear the bill because St. Luke’s, St. Al’s and Blue Cross don’t like it. Kinda makes you wonder who Patrick thinks he works for.”

Although HB 140 would have prevented medical discrimination by organizations doing business with the state, Giddings said more is needed. “We need stronger legislation that will protect all Idahoans, not just those working in healthcare. We’re seeing mandates at Simplot and other large employers. We need something to protect all employees in Idaho.”

Lt. Governor Janice McGeachin is calling on House Speaker Scott Bedke (R-Dist.27) to convene the House to address this matter. But Bedke, who had no problem supporting the big-government shutdown of “non-essential” businesses that caused never-before seen levels of unemployment, suicides, and drug overdoses in Idaho, suddenly lays claim to a moral high ground by saying he’s a small-government conservative Republican and that government shouldn’t get involved in private employment contracts.

The hundreds of Idaho business owners that never re-opened and their employees who lost their jobs would probably like to have a conversation with Bedke about that.

KTVB’s Brian Holmes, who interviewed Bedke, used deceptive wording to claim the “vaccines” are FDA approved. Homes used the phrase, “FDA-approved Emergency Use Authorization.” However, as reported at Healthline.com on July 6, “COVID-19 vaccines have been given emergency use authorization in the United States but have not yet been granted full approval. So far, the FDA has shown no indication of when it will grant full approval for these vaccines.”

Perhaps Bedke and Holmes should hear the phone call in which a Moderna employee informed a woman who developed Guillain-Barré (a serious autoimmune disorder) after getting the allegedly “safe vaccine,” that no, “The Moderna Covid-19 vaccine has not been approved or licensed by the Food and Drug Administration.” Yes, Bedke and Holmes, that’s a direct quote from a Moderna employee.

Why is Brian Holmes deceiving his viewers?

And why is House Speaker Scott Bedke deceiving all Idahoans?

And why did our state’s largest medical organizations decide to make mandatory a medical treatment that is not FDA-approved, but has only an experimental Emergency Use Authorization?

And why are St. Luke’s, St. Al’s, and Primary Heath mandating an experimental injection that has directly caused more than 5,000 deaths and 400,000 injuries, more than all deaths from all other vaccines combined since such data started being tracked in 1990?

And why are they mandating this treatment when the average age of someone dying from Covid is higher than the average lifespan in America?

And why do Idaho’s hospitals and medical professionals continue to refuse to prescribe ivermectin or hydroxychloroquine and zinc when the data is now overwhelming that these inexpensive, safe medications will reduce the likelihood of contracting Covid-19, and if one does contract it, reduces hospitalizations by at least 85 percent? While they’re at it, we now have official records of thousands of deaths from people taking this “safe” vaccine and hundreds of thousands of injuries. Can St. Luke’s, St. Al’s, or Primary Health show us even one death or any injuries from people combatting Covid-19 using hydroxychloroquine or ivermectin?

The nurse is only one of many who want to know, “Why the change?” The nurse said hospital leadership claims Covid cases have increased 20 percent, but they have provided no data to validate that claim. “The numbers we have and the data that leadership is quoting does not add up.”

Idahoans deserve to know why these organizations and their willing accomplices in government and the media are peddling medical misinformation and forcing people to abandon their careers.

One popular hypothesis aligns with the mantra, “Follow the money.” Idaho received over $8.1 billion in CARES Act money, and Idaho’s hospitals received a lot of money each time a patient with Covid was admitted. Where did the $8.1 billion get spent?  Nobody seems to know. But this much is known: Pfizer earned a record $4.9 billion in the first quarter of 2021 and boasted that their “strategy” is paying off. They expect to pocket approximately $26 billion in 2021. Moderna’s Q1 profits were close to $2 billion. AstraZeneca’s Q1 profits were $1.56 billion.

What kind of agreements have been made by those at the top of Idaho’s health care systems?  Idahoans’ lives may depend on what transpires in our state’s medical systems. If anyone within these organizations has information that would explain the irrational decisions being made regarding the experimental mRNA injections, please contact True Idaho News via our secure email address, TrueIdahoNews@Protonmail.com.  We will guarantee your anonymity.