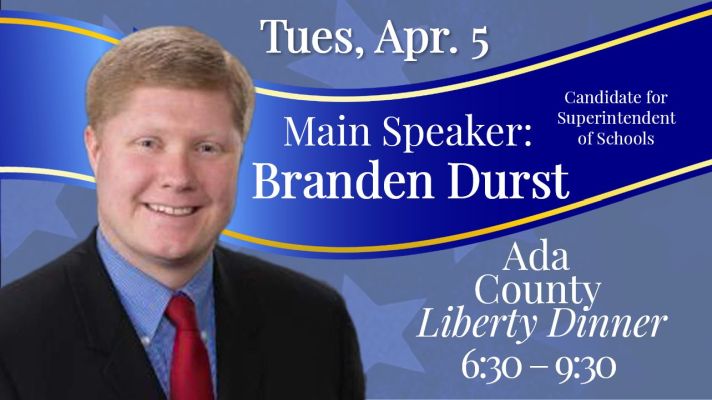 The next Ada County Liberty Dinner will be Tuesday evening, April 5, and feature State Superintendent of Schools candidate Branden Durst. The event will be held at Watson’s Café & Spirits, located at 8001 W. Fairview Avenue (at Milwaukee Avenue) in Boise [MAP]. Doors open and 6:30 pm and tickets can be purchased at www.trueidahonews.com/acld.

Durst served in the Idaho House of Representative from 2006 – 2010 and then in the Idaho Senate in 2012 and 2013, where he was Idaho’s youngest Senator.  Durst holds a bachelor’s degree in political science and a master’s degree in Public Administration.

Durst is also a mediator and has been approved by the Idaho Supreme Court to be on their list of child custody mediators.

Attendees at the Liberty Dinner will be able to ask Durst questions about his voting record, his stance on the issues, and his position on the behind-the-scenes teaching of Critical Race Theory in Idaho that was exposed in a recent undercover operation (see the report).

Previous speakers at the Ada County Liberty Dinners have included Janice McGeachin (candidate for Governor), Priscilla Giddings (candidate for Lt. Governor), and Dorothy Moon (candidate for Secretary of State). Fees for the event cover the cost of the venue plus the meal, with the remaining proceeds helping to elect Constitutionally minded conservatives in Ada County.

In addition to having a main speaker, each Ada County Liberty Dinner also includes additional informative presentations to educate and equip citizens with insights not heard or seen on major media platforms.

Five counties in Idaho now have regular Liberty Dinners. Shadowtrail Media, parent company of True Idaho News, organizes the Liberty Dinners in Ada County. So that the venue can know how much food to prepare, tickets must be purchased no later than noon on Monday, April 4.

Tickets to the Ada County Liberty Dinners and other liberty-minded events around the state can be obtained at www.trueidahonews.com/events.